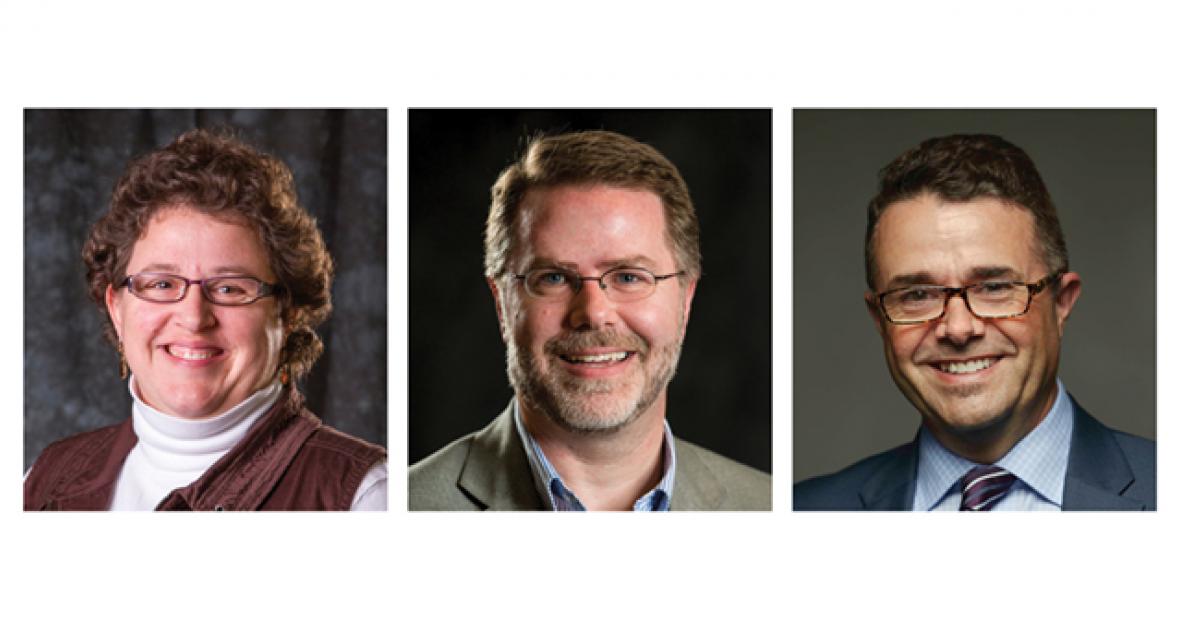 Open to the public, the College’s 2016 installation ceremony for endowed chairs, professorships, and staff will begin at 11 a.m. Thursday, Oct. 6, in Herrick Chapel.

This celebration provides a unique opportunity to honor current endowed chairs and celebrate the naming of three new designees:

Speaking at the event will be President Raynard S. Kington, Dean of the College Michael Latham, and the newly installed chairs, among others.

Purcell, who graduated from Grinnell with a B.A. in history in 1992, joined the Grinnell faculty in 2000 and serves as the director of the Rosenfield Program in Public Affairs, International Relations and Human Rights. Her research interests include the Early National, Antebellum and Civil War periods in U.S. history; popular culture and political culture; gender history; and military history. She is the author of Sealed with Blood: War, Sacrifice, and Memory in Revolutionary America and Eyewitness History: The Early American Republic. She also is co-author of The Encyclopedia of Battles in North America, 1517-1915, which won a 2000 Best of Reference award from the New York Public Library. She is working on another book, Spectacle of Grief: The Politics of Mourning and the U.S. Civil War. Purcell is the latest in a long line of historians at Grinnell to hold the L.F. Parker Chair, which was established in 1888.

Christel joined the library faculty in August, following Richard Fyffe. Before coming to Grinnell, Christel served with distinction in positions of increasing responsibility over the past 22 years at Hope College, Vassar College, and the College of Wooster. He is a committed advocate for the application of digital technologies in teaching and research. He was the principal investigator on two Andrew W. Foundation grants awarded to the Five Colleges of Ohio and has served on the Steering Committee for the Institute for Liberal Arts Digital Scholarship. The Samuel R. and Marie-Louise Rosenthal Professor of Library Science was made possible by Samuel Robert Rosenthal and his wife, Marie-Louise, who were generous supporters of the College. Samuel R. Rosenthal was a trustee of the College from 1962-76 and from 1986-94.

Cook-Martín is the first to hold the post of Assistant Vice-President for Global Education and Senior International Officer, promoting strategic planning for international education and external partnerships. At Grinnell since 2007, he was elected chair of the sociology department in July 2015. As a political sociologist, he focuses on understanding migration, race, law and citizenship in an international field. His first book, The Scramble for Citizens: Dual Nationality and State Competition for Immigrants, won The Thomas and Znaniecki Best Book on International Migration Award. He also is co-author of award-winning Culling the Masses: The Democratic Roots of Racist Immigration Policy in the Americas. His endowed position was made possible through the generosity of Carolyn “Kay” Bucksbaum ’51, a life trustee who formerly chaired the Board of Trustees. Earlier this year she committed $5 million to expand and enhance Grinnell’s globally-related programs.