The latest edition of the Grinnell College National Poll (Grinnell-Selzer) shows that nearly 6 in 10 Americans believe the economy will get worse in the next 12 months – the highest number recorded in the history of the poll. And the pessimism about the future of the economy may be weighing down President Joe Biden’s approval ratings across the board.

The findings of the poll – a partnership between Grinnell College and renowned pollster J. Ann Selzer of Selzer & Company – were released on Wednesday, March 23, 2022. 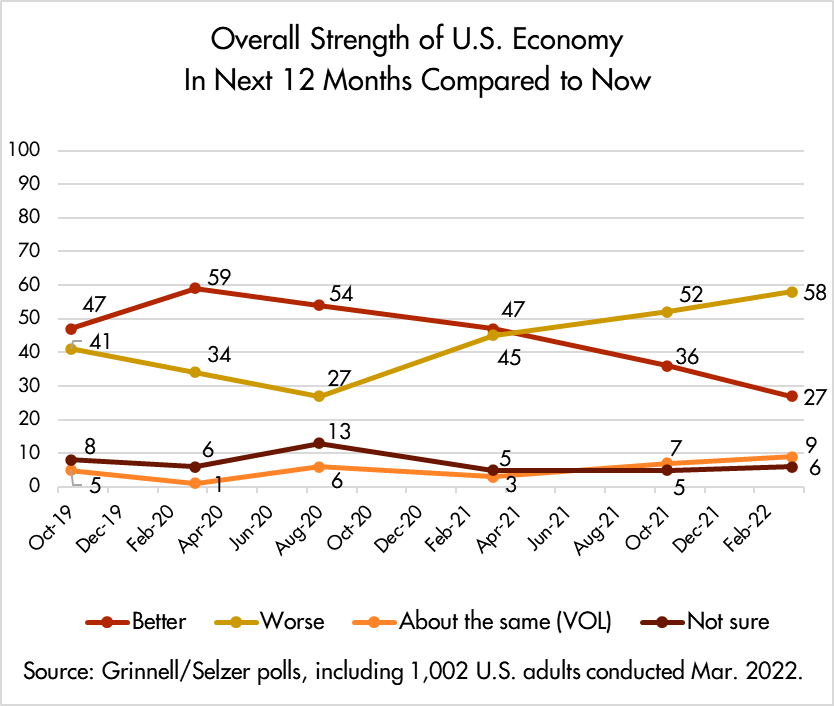 The survey found that only 27% of Americans believe the economy will be better in 12 months, which is 20 percentage points lower than it was one year ago (GCNP, March 2021). Looking ahead, 58% of respondents believe it will get worse in the coming year. A majority of Americans (57%) disapprove of Biden’s handling of the economy.

“The collapse in economic confidence means that President Biden and congressional Democrats are facing strong headwinds as they head into the November elections,” said Peter Hanson, Grinnell College National Poll director. “Midterm elections are frequently a referendum on the performance of the administration, and these numbers are a sign that the judgment from voters is likely to be harsh. Absent a major change, Republicans are well-positioned to take control of Congress.” 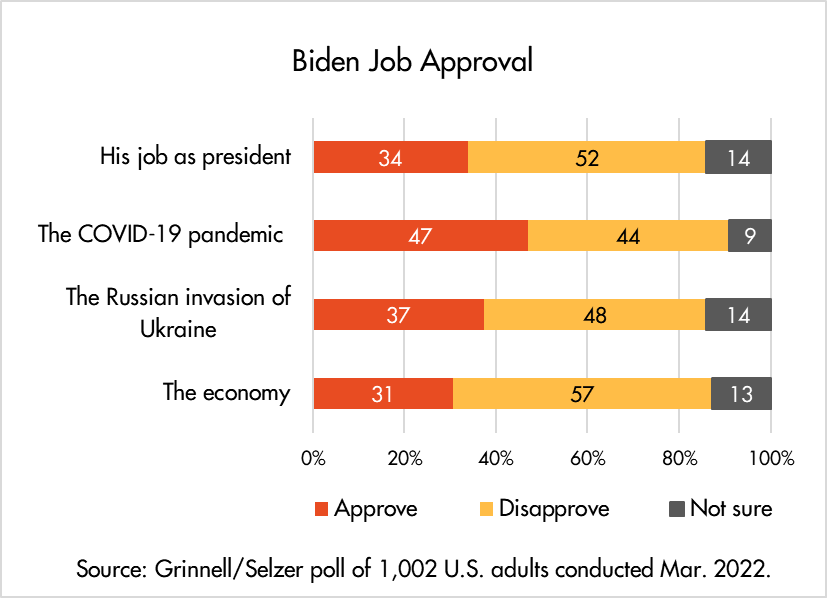 The poll finds more Americans disapprove than approve of Biden’s performance as president (52% disapprove, 34% approve), with 14% saying they are not sure. While Biden wins solid approval among Democrats (70%), Republicans overwhelmingly disapprove (89%).

“It’s interesting to me that the ‘not sure’ factor is as high as it is,” said J. Ann Selzer of Selzer & Company. “It seems unlikely that Joe Biden isn’t well known enough to make a judgment. I believe this is a reflection of the high level of uncertainty everywhere – the war in Ukraine, inflation, COVID-19 and more.”

With millions of Ukrainians currently displaced from their homes, 77% of Americans believe the United States should allow Ukrainian refugees to resettle here, and 72% support sending U.S. weapons to Ukraine to help aid their fight. But Americans oppose direct military involvement in the conflict: A strong majority (70%) is against sending U.S. troops into the battle, and 52% oppose the U.S. enforcing a no-fly zone over Ukraine. Notably, given the high level of partisan polarization in the United States, there were no substantial differences in the views of Republicans and Democrats on these issues.

“More than 70% of Americans stand behind the current U.S. response to the war, but only 37% of Americans approve of the job the president is doing handling this issue,” said Danielle Lussier, Grinnell College associate professor of political science. “There is a disconnect. We see broad support for the approach the president has taken — sending weapons but not troops — but the population doesn’t want to give Biden credit for it.”

Parties Divided on Confidence in Vote as Midterm Elections Near

Sixty percent (60%) of Americans say they are very or somewhat confident that votes in the 2022 general election across the country will be counted as voters intended. That includes 78% of Democrats, 60% of independents, and 44% of Republicans. 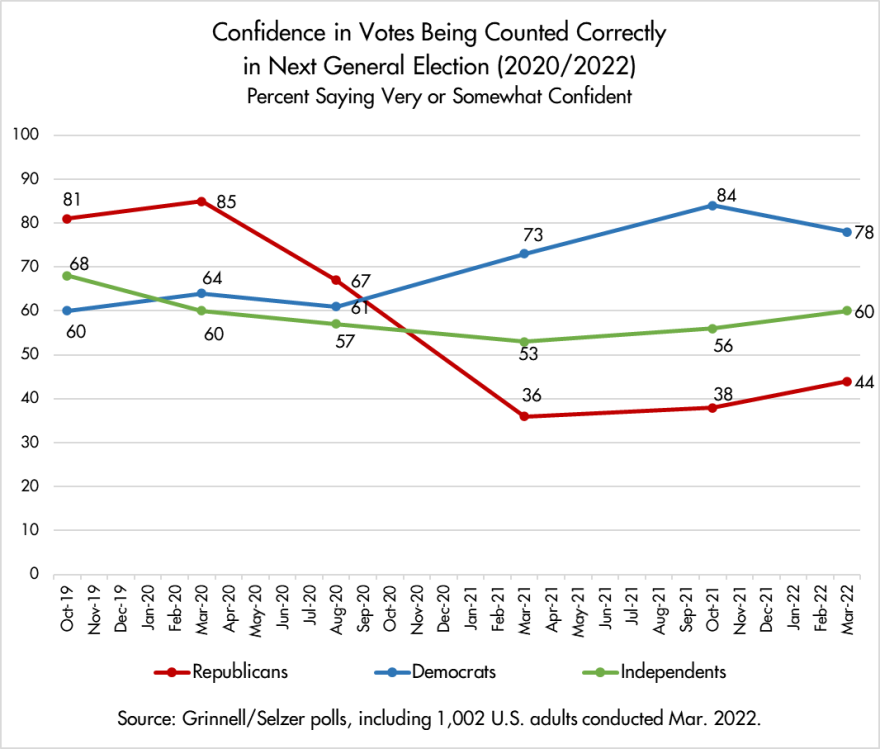 “There remains a stark partisan divide in voter confidence going into this year’s general election, with Democrats expressing more confidence than their Republican counterparts,” said Hanson. “Simply put, Republican confidence in the voting process has not recovered from Donald Trump’s false claims of fraud in the 2020 election.”

The Grinnell College National Poll, conducted March 15–20, 2022, for Grinnell College by Selzer & Co. of Des Moines, Iowa, is based on telephone interviews with 1,002 U.S. adults ages 18 or older, with a maximum margin of error of plus or minus 3.1 percentage points.