A Majority of Americans Thinks Public Schools are on the Wrong Track, Fueled by How Racism is Addressed in the Classroom

The American public feels what is being taught in public schools is on the wrong track by a greater than 2-to-1 margin – 64% to 24% – according to the newest edition of the Grinnell College National Poll (Grinnell-Selzer). The results of the poll, taken March 15–20, 2022, by Selzer & Company on behalf of Grinnell College, were released on Wednesday, March 23, 2022. 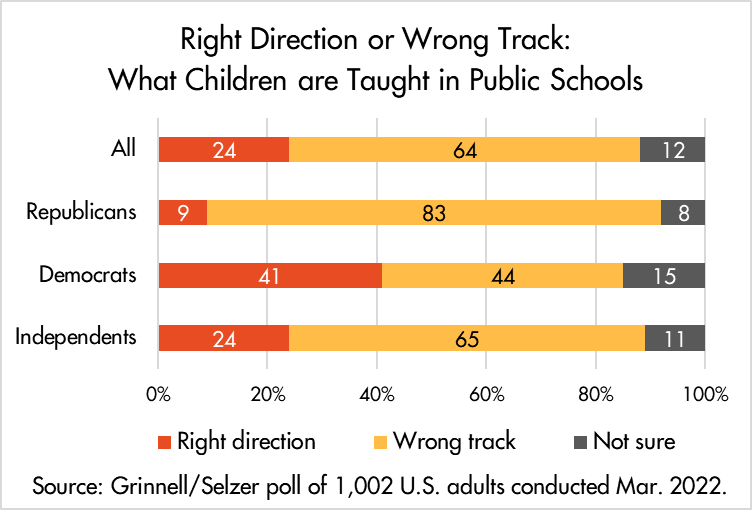 Beyond these partisan differences, distrust in the ability of public schools to teach about racism was associated with the belief that public schools are on the “wrong track.” Of the 24% who say things are headed in the right direction, a strong majority (71%) trust how educators teach about racism. However, of the 64% who feel schools are on the wrong track, a majority (54%) say they distrust educators’ decisions on this issue.

"Historians point out that U.S. public education has long been driven by three overarching, but sometimes conflicting, goals: democratic equality, social efficiency, and social mobility," said Cori Jakubiak, associate professor of education at Grinnell College. "The racial reckoning catalyzed by the 2020 killing of George Floyd and the Black Lives Matter movement has prompted some educators to teach about structural racism as a central way to promote the democratic equality goal of public schooling.”

Jakubiak added, “We find that the public is divided over whether the schools can be trusted to teach about racism, and that these concerns have fueled the sentiment that schools are on the wrong track."

Respondents were asked about three issues regarding their trust for educators in public schools. “Teaching about racism in the United States” was the only one for which less than half of respondents indicated trust for educators. Most Americans trust the ability of educators in public schools to make good choices on which library books are appropriate for students (71% to 22%), as well as their ability to respond appropriately when a student poses a risk of doing something violent (69% to 24%). 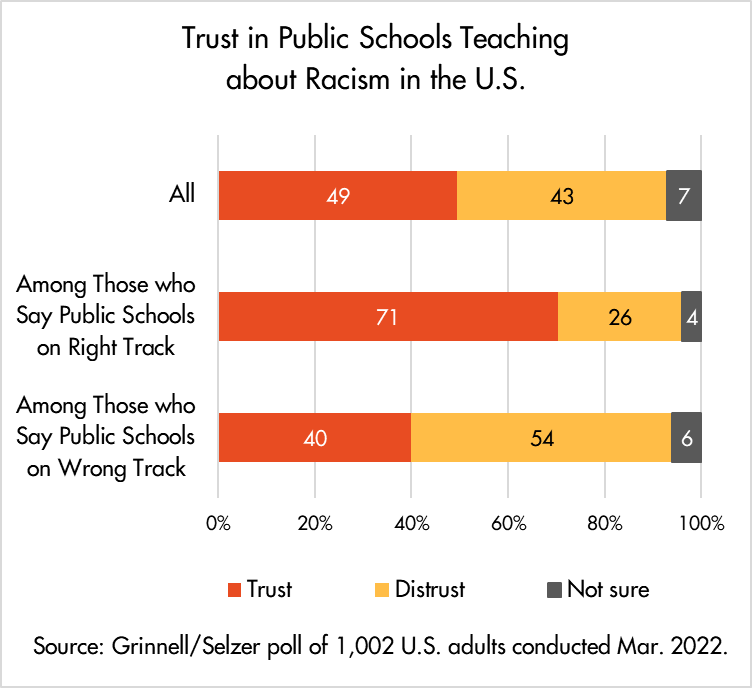 Affirmative Action Looks to be Endangered

With the Supreme Court poised to hear a challenge to Harvard University’s practice of taking the race of its applicants into consideration as part of its admission process, the poll asked if Americans agreed or disagreed with the practice.

A strong majority (68%) said colleges and universities should not be allowed to take the race of their applicants into consideration when deciding whether to admit a student, with only 27% showing support. Nearly 9 in 10 Republicans (87%) oppose it, while Democrats are evenly split with 47% supporting and 47% opposing the practice.

There is no notable difference in views by racial identity.

“Since the Supreme Court’s Bakke decision in the 1970s, colleges and universities have had the ability to consider the racial identity of their applicants as one factor among many when admitting students,” said Peter Hanson, Grinnell College National Poll director. “That practice now faces a hostile court and a hostile public. A strong majority of people oppose colleges and universities using race in their admission process. We find no major difference in views on this topic by racial identity. Even among Democrats, support for considering race in college admission does not break 50%.” 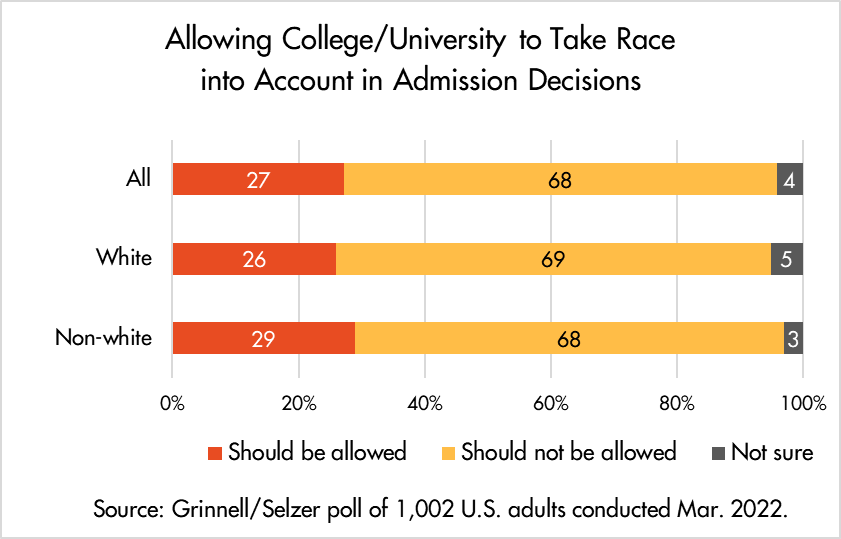 With many states considering the use of taxpayer money to support students who attend private religious institutions, the poll asked two versions of the question regarding support for the idea. In both cases, the aggregate finding was a majority of people oppose the idea, with 55% saying they disagree with it and 42% saying they agree.

“The question has always been, does the wall of separation between church and state exist to protect religious practice from intrusion by political authorities, or does it exist to protect political processes from religious activity?” said Caleb Elfenbein, associate professor of history and religious studies at Grinnell College.

“The reality is that wall is constantly under construction, and it changes over time. Those in favor of using taxpayer money to support students attending religious schools are trying to move that wall in favor of more robust state support for religious instruction, but most Americans are skeptical of using taxpayer funds in this way,” Elfenbein added. 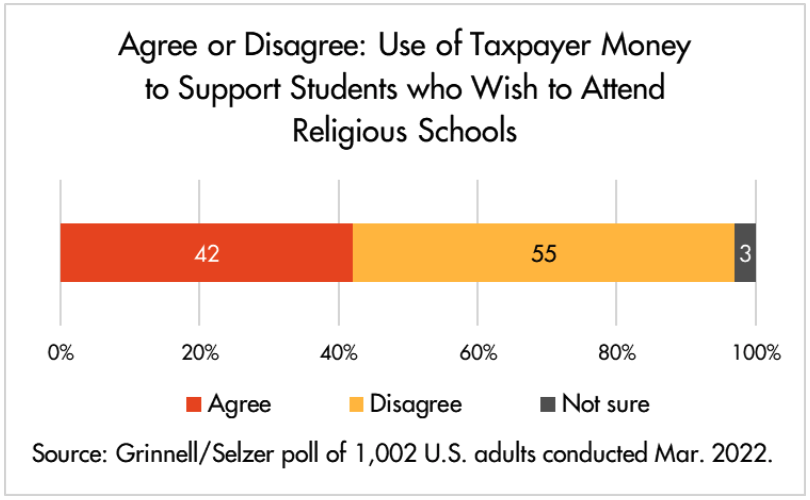 Other poll findings include: