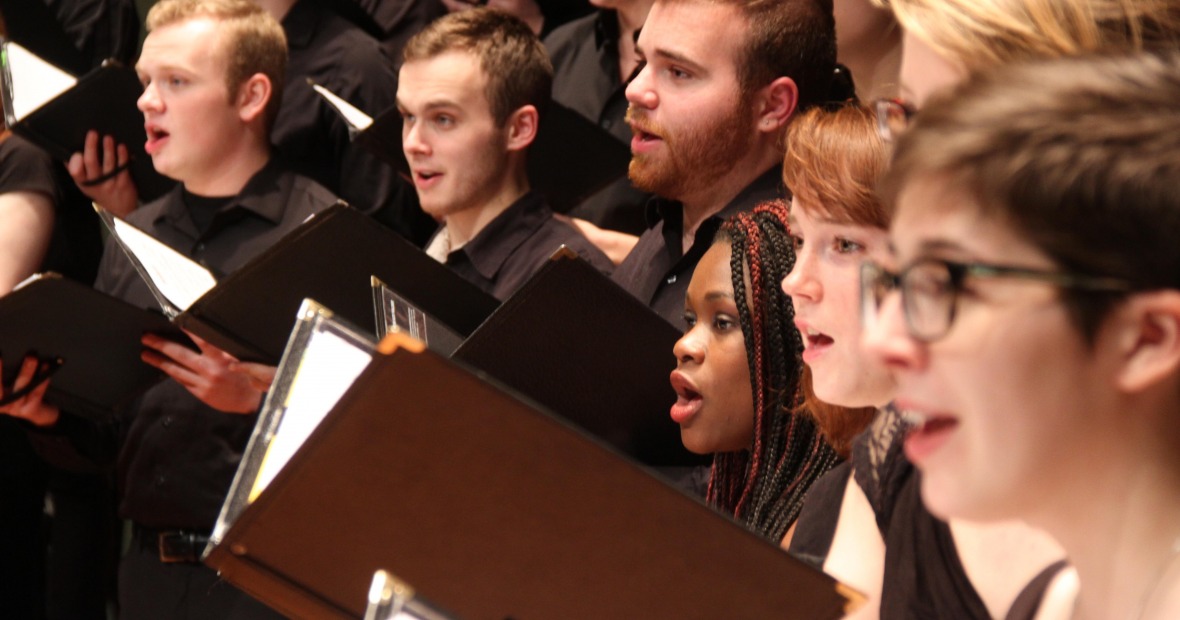 The Grinnell Singers, the College's premier choir, will perform in five concerts during a spring concert tour of Minnesota, Wisconsin, Illinois, and Iowa from March 16-21.

The tour will begin with two concerts in Minnesota:

In these concerts, the Grinnell Singers will join forces with the Lyra Baroque Orchestra in a performance of G. F. Handel’s lively work, Dixit Dominus, and J.S. Bach’s Mass in A Major. Tickets are $25 for adults, $20 for seniors and members of Minnesota Public Radio, and $5 for students. Tickets may be purchased online.

Dixit Dominus, a piece that Handel composed when he was just 21 years old, includes some of his most spirited and joyous choral music. Bach’s Mass in A Major is a rarely heard work, which reveals a different side of the composer. Its elegantly simple melodies show Bach communicating in a more direct manner, although the piece also includes some of Bach’s more characteristic intricacies.

The two performances mark the third concert season in which the Grinnell Singers have collaborated with the St. Paul-based Lyra Baroque Orchestra, a professional period-instrument ensemble led by harpsichordist Jacques Ogg. The choir’s 2017 performance with Lyra, under the direction of guest conductor Simon Carrington, was hailed as “superbly nimble and confident” by the Rochester Post-Bulletin.

Following the Minnesota concerts with Lyra, the Grinnell Singers will present concerts on their own that feature a remarkable pair of works: Thomas Tallis’s majestic 40-voice motet, Spem in alium, and Eric Whitacre’s ingenious piece of choral story-telling, Leonardo Dreams of His Flying Machine.

The program also includes selections from Considering Matthew Shepard by Craig Hella Johnson. This work is a powerful and uplifting tribute to Shepard, a gay college student who was left to die after he was attacked in a hate crime in Wyoming. The Chicago Tribune reviewed the piece, writing that it “will move many listeners to tears even as it reaches beyond tragedy to peace, understanding, and forgiveness.”

The remainder of the concert tour includes the following performances, which are free and open to the public:

Known for their innovative and adventurous choral programming, the Grinnell Singers have premiered over 20 choral works in more than 10 years under the direction of John Rommereim, Blanche Johnson Professor of Music. He is active as a composer, singer and scholar whose work is centered in the areas of Russian choral music and early music performance.

Each year the choir presents concerts across the U.S., and the group has also traveled to Estonia, Finland, Russia, the Czech Republic, Bulgaria, Romania, and Turkey. The Singers have also been invited to perform at two regional conventions of the American Choral Directors Association.