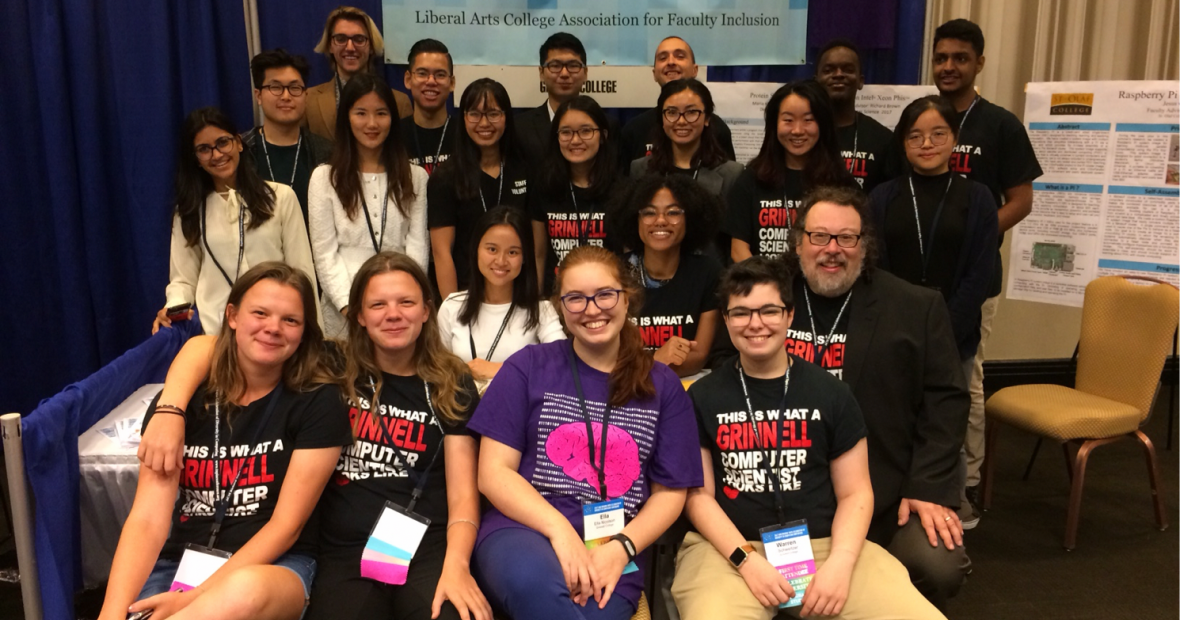 Computing is defining the current Digital Age and has the power to change the future. Ensuring that individuals from different backgrounds are able to contribute to the field fosters the exchange of unique and innovative ideas, which is critical to stimulating creativity and promoting inclusivity. For the past few years, Grinnell College has been supporting students to attend the Richard Tapia Celebration of Diversity in Computing Conference sponsored by the Association for Computing Machinery. Last year, the Wilson Center for Innovation & Leadership helped Aleksandar Hrusanov ’18, a computer science and mathematics double major, Anh Thu Pham ’19, a computer science major, and Linh Pham ’18, a computer science and mathematics double major, attend the Tapia conference held at Atlanta, GA, from September 20-23.

The conference, themed "Diversity: Simply Smarter," examines diversity as necessary in ensuring innovation, creativity and intelligence in computing. The Tapia Conference provides a supportive and educational space where individuals from underrepresented groups are able to connect with others who share similar backgrounds, obtain advice with computing leaders in academia and industry, and feel empowered to embrace the challenges associated with being a minority in the field.

Lessons from the Conference

For Linh Pham, the conference provided her an opportunity to view diversity not only as a buzzword, but as an idea rooted in mobilizing a collective from different backgrounds to produce high-impact, human-centered innovations. “Technology is getting increasingly popular in almost any job or industry, but the fact that the industry is still dominated by a group of people reflects the reality that the product is not for everyone and that there are inherent biases and stereotypes in the way technology is produced,” explains Pham. “Being able to code is not enough to be able to be succeed in this field, but more than that is to engage different ideas and voices from people of different background and expertise so that the product actually resonates with people’s life.”

To that end, the conference provided a space for Pham to engage with entrepreneurs and innovators and experience the imaginative new directions that computing is heading. From learning about the use of software in machine to the use of mathematics and medical imaging to improve patient outcomes in cancer radiotherapy, Pham was immersed not only in groundbreaking technologies in the field, but also with the diversity of individuals committed to solving big problems and creating new opportunities. “The conference is a celebration that is full of inspiration and energy and presented a diverse technologist community,” Pham writes. “I quickly came to feel the sense of belonging, in which I realized that I am part of the community who believes in me and wants to help me become successful.”

Hrusanov echoed Pham’s sentiments, praising the conference for its ability to showcase groundbreaking ideas forwarded by individuals from different backgrounds. Ultimately, attending the conference inspired him to embrace the real yet meaningful challenges associated with leadership and innovation. “Seeing all those people at Tapia and listening to their presentations on various topics gave me yet another perspective on how the technology world is evolving,” Hrusanov begins. “I learned that it takes just one person to address a problem or to take the path to improving a given aspect of our world in order for something great to happen. I became more confident in myself as a person in terms of what I could achieve both on a personal and on a higher level.”

Much like Pham and Hrusanov, Anh Thu Pham views the conference as substantive and impactful. At the same time, the conference prompted her to examine the importance of considering less talked about forms of diversity as well as the transformative power of modelling – of simply having one relatable person in the room. The Wilson Center for Innovation & Leadership would like to highlight her powerful essay, below, in the hopes of providing a space to candidly showcase the diversity of student leaders at Grinnell College and to express the use of storytelling as a unique tool in fostering empathy, discussion and reflection.

“Grinnell College and the Grinnell Computer Science department preaches diversity. However, I realized that these institutions pride itself mainly on physical diversity with organizations for students of colors and gender minorities in STEM. The Tapia Conference opened my eyes to other less visible forms of diversity, such as disability, socioeconomic levels, and difficult familial backgrounds. These forms of diversity are present in Grinnell, but not accepted, understood, and celebrated in the same way as racial and gender diversity.

When I was a first year, my friend group decided to Google Map their houses to show each other where each person lives. I didn’t want to share. My house doesn’t look like theirs. It’s not a traditional standalone American home with a nice driveway and a groomed yard. It’s not even my home. It’s someone else’s foreclosed house that my family lives in until the bank, the government, or whoever kick us out. My friends were PCPOP students, full of racial and gender diversity with first-generation college attendants. They meant well. They meant to bond. They didn’t realize that their activity ostracized me.

Students will keep other students in check when it comes to racism and sexism. Most people don’t realize that there is another side to microagression that NO ONE ever talks about, especially students who are on the receiving end. Grinnellians are welcomed and proud to announce that they’re black, Asian, gay, a woman, and non-gender binary. Rarely anyone wants to admit that they are poor, that they come from a broken home, that they feel the pressures of their family’s sacrifices daily to be accomplished.

Out of all my minority labels —bisexual, first-gen, immigrant, woman of color, raised in a single parent household, comes from a refugee family with “boat people”—my poorness affects me the most. I do not know of any space for me to receive support for my disadvantages like the multicultural suites or the Stonewall Resource Center. I am extremely grateful that Grinnell equalizes most of my expenses so that I appear the same as any other student. I know from the statistics of students who receive financial aid in Grinnell that I am far from alone. Sometimes, it feels like I am. No one talks about it.

Asana hosted a breakfast talk at Tapia. Each speaker introduced themselves and their background. The only man on the panel talked casually about his parents, who suffered from the crack epidemic. He talked about how no one thought he could make it. Now that he has 'made it,' he doesn’t want to be an exception. He wants it to be the norm that kids like him can achieve.