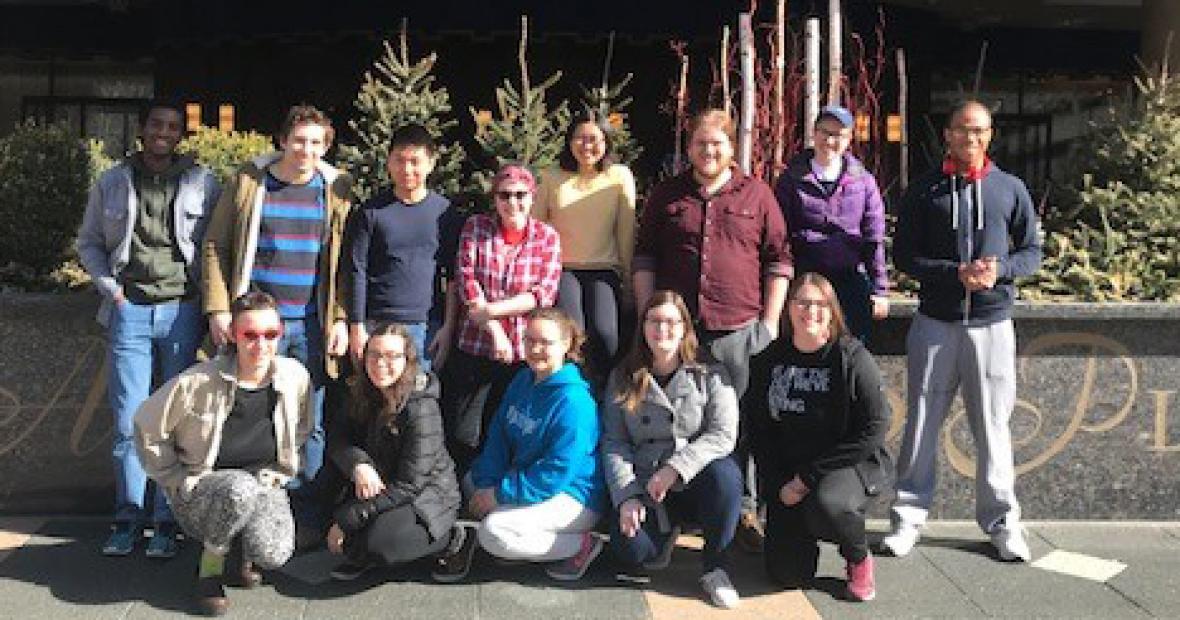 White privilege is an invisible and transparent preference that is often difficult to have a conversation about, much less challenge. Yet, for the past 17 years, the White Privilege Conference (WPC), hosted by The Privilege Institute, has addressed difficult concepts of privilege and oppression and offers solution and team building strategies to work towards a more equitable world. The Institute’s vision is to build a community dedicated to helping to dismantle white privilege, white supremacy and oppression. The Wilson Center for Innovation & Leadership sponsored 11 students to attend the annual WPC from April 4-7 in Grand Rapids, MI.

The theme, “Super People & Superpowers: Prepare to be The Future of Social Justice Work,” allowed students to gain awareness of the intersectionality of white privilege in the context of various systems of privilege. Ultimately, the WPC provided a collaborative and meaningful platform where students worked for equity, justice, and access through personal development and social change.

Lessons from the Conference

For Rachel Hinkley ’21, attending a workshop on how high-stakes testing reinforces white privilege and fuels anti-blackness allowed her to trace the history of education inequality in the United States. Hinkley describes that the existence of an achievement gap is perpetuated using standardized testing, fueling the existence of white privilege. “I learned a lot about education during the WPC and it made me realize that I want to explore various issues more,” Hinkley recounts. “With regards to my plans, I plan on taking a class on education next semester and hope to someday combat inequitable education policy.”

For Vera Kahn ’18, a gender, women’s, and sexuality studies major, the WPC prompted her to consider producing social change through her music community. “I was able to learn more about racism and white supremacy in America, the theoretical and practical facts that are behind them, as well as solid action plans and ways to continue learning after the conference,” Kahn describes. “I play in a rock band, and we are always trying to figure out ways to use our platform to advance issues of social justice.” Further, Kahn examined her identity as a white individual and ways to take advantage of this positionality to be an ally for others. “Leadership does not have to mean overpowering or being congratulated or having star power. It can also mean taking a back seat and supporting the work of people of color,” she writes. “I can embody social justice best and even use leadership skills by taking action without needing to be at the forefront.”

Syamala Gumidyala ’21, writes that the conference’s ability to bring in practitioners, social change makers and experts from diverse backgrounds allowed for greater and much-needed inclusivity. “As a woman of color in STEM, it is difficult for me to come by people of color who are my instructors let alone women within the departments at Grinnell College,” Gumidyala explains. “Attending workshops to see the kind of work that people have in store to make change within academia in order to make students of color feel more welcoming was extremely refreshing.”

For Allie Pearce ’20, a political science major, the WPC inspired her to conceptualize innovative and engaging methods for producing meaningful social change. “Through the speeches and workshops, I learned much that I didn’t know about the struggles that people of color face, and how I can engage communities in racial justice work, “ Pearce begins. “Though, I was able to brainstorm strategies on how to involve youth in equal rights advocacy, especially through the utilization of creative outlets to process and share what they learn about discrimination and inequality.”

Equally importantly, the conference provided an opportunity for Pearce to examine and improve on her own leadership skills and embrace the challenges associated with being at the forefront of social change. “Even in a few short days, I was able to improve my interpersonal skills, create action plans to bring back to campus, work on my organizing skills, expand my basis of knowledge about the prevalent issues of inequality that I hope to alleviate, and gain independence as I chose which workshops to attend and managed my time accordingly,” she writes.

Similarly, Jillian Rix ’19, a physics major, plans to leverage the innovative tools and cross-disciplinary approach she learned from the PWC to design more equitable policies in the Grinnell community. “The most significant concept I believe I internalized at the White Privilege conference was that by remaining “neutral” in terms of supporting my peers of color, I was in fact acting in a way that was detrimental to the pursuit of equal opportunity,” Rix explains. “I left the conference with a concrete plan to incorporate more intersectionality into the Gender Minorities in Physics group that I’m a part of on campus. Sessions at the conference such as “Women at the intersection of feminism and white privilege” provided constructive self-examination approaches that I feel will be very connected to future projects promoting inclusion in the physics department,” she concludes.

Hinkley, Kahn, Gumidyala, Pearce, and Rix had different experiences that resulted in rather similar outcomes. They all praised the program for giving them a platform for embracing the challenges associated with leadership and for allowing them to gain the tools necessary to be effective leaders and innovators to produce social change.