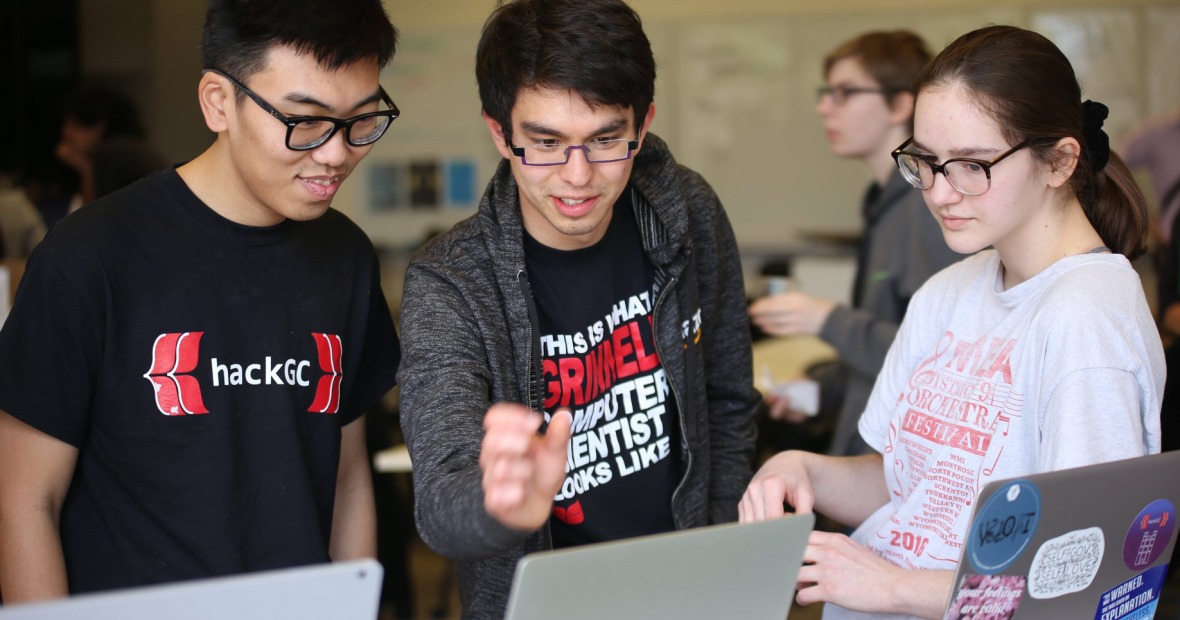 If your notions about computer hacking feature coders spreading anarchy and amassing Bitcoin fortunes with nefarious online exploits, then an event held during the spring 2019 semester might force you to rethink. “Hack Grinnell College” (Hack GC), in its fourth year of sponsorship by the Wilson Center, was a weekend-long marathon of computer coding and entrepreneurship that convened this past spring semester as part of “I Love Data Week” to show participants that, rather than merely being a tool for tearing down the status-quo, hacking can also advance social justice.

“I think that commitment to social justice is necessary in tech spaces,” said Elise Bargman ’21, a participant in last year’s Hack GC, who spoke to the Scarlet & Black in a February interview concerning the 2019 Hack GC event. “I’m really glad that the Grinnell community and the Grinnell tech community has decided to take that on as part of [its] mission.” It’s worth emphasizing that Bargman is a gender, women’s and sexuality studies major, not a computer science major; Hack GC participants need not be computer science majors — or even know how to code — to participate.

The history of hackthons has not always been benign. The first event to use that name was a meeting of ten hackers who convened in Canada in 1999 to discuss ways of getting around U.S. export regulations on cryptographic software. Then, in 2013, developers Mike Swift and Jonathan Gottfried formed an organization they dubbed Major League Hacking (MLH) to promote student-run hackathons at colleges and universities throughout in North America. The idea, according to the organization’s website, was to foster “an engaged and passionate maker community, consisting of the next generation of technology leaders and entrepreneurs.”

Grinnell joined this movement during MLH’s founding year by sending a group of seven students to the “MHacks” event at the University of Michigan. The meeting was attended by 1,200 participants from over 100 schools across the country, and featured high-profile guest speakers as well as marathon coding sessions. It was the largest hackathon in the country.

In the spring of 2014, Grinnell held its first hackathon on campus, and in 2018, students renamed the Grinnell event Hack GC. Like college hackathons elsewhere, Hack GC featured speakers, prizes, little sleep, and lots of entrepreneurial spirit. The goal, as in all hackathons, was to come up with a killer app — a piece of software which pushes back the frontiers of what can be done with technology in such an ingenious way that it goes viral. What made Hack GC peculiarly Grinnellian was its focus on creating software that put service ahead of profit.

For example, during the 2018 Hack GC, Bargman’s team designed an app called Soap Box to give students information about different campus initiatives, the names of their student senators, and candidates for student government positions. Another 2018 participant, Devansh Chandgothia ’21, told the S&B about the Food Share app his team developed to enable Grinnellians with extra meal plan credit to share it with those on campus who were going hungry.

The 2019 Hack GC prizes included a Kindle reader, a Google Chromecast device, and a JBL Flip wireless speaker. The first-prize winner was Hunain Ali ’21, who created an application intended to help build an atmosphere of recognition and respect across campus. Using Ali’s app, anytime a Grinnellian did something nice or helpful, the kind act could be rewarded with the public broadcast of a compliment. Anyone receiving such a compliment would then be encouraged to pay it forward by posting another compliment, and so on. Other prizewinning apps developed during this year’s Hack GC included software for ride-sharing and two programs dedicated to measuring and optimizing Grinnell students’ happiness.

The development of apps like these are the reason for the Wilson Center’s ongoing support for the College’s home-grown hackathon. As Wilson Center Program Coordinator Robert Ludwig told the S&B, this support is driven by “[t]he idea that we can use our technology and our ideas to [create] tools to better [the students’] goals.”