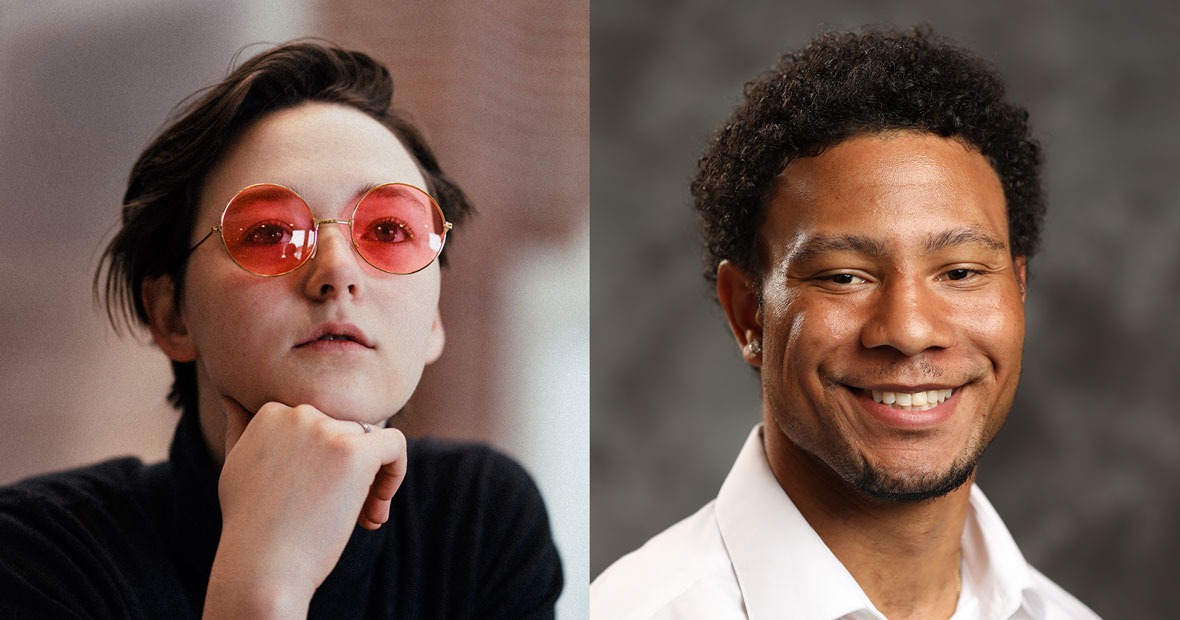 Gruensteidl and Hill are among 47 students selected nationwide from 153 finalists to receive the $36,000 fellowship from the Thomas J. Watson Foundation. The fellowship program offers “college graduates of unusual promise a year of purposeful, independent exploration and international travel to enhance their capacity for resourcefulness, imagination, openness, and leadership and to foster their humane and effective participation in the world community.”

Gruensteidl, an independent film, communication, and media studies major, will explore the topic “Against All Odds: Women’s Empowerment in Film.” Traveling to Iceland, Spain, Ireland, Denmark, Finland, Italy, Israel, Germany, Taiwan, Australia, and New Zealand, she will visit prolific female filmmakers, seeking to understand how they overcome misogyny in the industry and ultimately thrive via self-empowerment. In addition she will take part in their film communities, visit with their crews and colleagues, and attend several film festivals. Although a final project is not required for the Watson, Gruensteidl plans to create a documentary about the abuse and empowerment of women and non-binary people in film.

Hill, a political science major with a concentration in statistics, will journey to China, Brazil, Senegal, Jamaica, and Dominican Republic to explore his topic, “Black Masculinity and Martial Arts.” Through informal interviewing, community engagement and observation, he will leverage the physical and spiritual aspects of martial arts to explore the intersection of blackness and manhood. Ultimately, he wants to gain skills that help him deconstruct the passive/aggressive dichotomies that he feels black men internalize.

Grinnell has partnered with the Watson Fellowship Program since it was established in 1968. With the announcement of this year’s Watson fellows, 82 Grinnell students have received this prestigious award.

“Watson projects are personally significant,” said Ann Landstrom, the College’s assistant dean and director of global fellowships and awards. “For both Helena and Max, their projects grew out of a deep personal interest and developed further through life experiences.”

Gruensteidl’s first award-winning film, You and I, won first place at a local film festival when she was 13. Her at home filmmaking merged into film production classes at her Des Moines, Iowa, high school. Upon arriving at Grinnell College, she designed her independent major and participated in a one-year off-campus study program to pursue her passion for film studies. She has held summer internships and served as an active member of the film and media communities at the Academy of Performing Arts in Prague and Grinnell College. Those experiences combine to provide expertise in directing, co-directing, cinematography, editing, production, photography, animation, web design and social media strategy. Her passion for visual storytelling and a personal understanding of filmmakers’ experiences make her well poised for a deeply profound Watson journey and a future career in cinematography.

Since a young age, Hill has demonstrated deep connection to his communities. Growing up in the San Fernando Valley in California, he was a leader in his faith community, developing strength and perspective for himself and others around identity and service. After he arrived at Grinnell College, he became a member (and in his senior year, a captain) of the football team, leader of a campus Bible study, monitor and barbershop coordinator for the Conney M. Kimbo Black Cultural Center, intern for the service and social innovation team and participant in the School for International Training off-campus study in Brazil, Spain, and South Africa. These experiences — along with his academic studies, campus research, and internships — provided him with a breadth and depth of impactful moments that tested his resiliency and resourcefulness as a black man. From this resiliency he seeks to explore what black masculinity looks like in communities outside the United States. Upon return from the Watson year, Hill wants to combat poverty through a mixture of housing development, policy research and advocacy, and teaching of financial literacy.