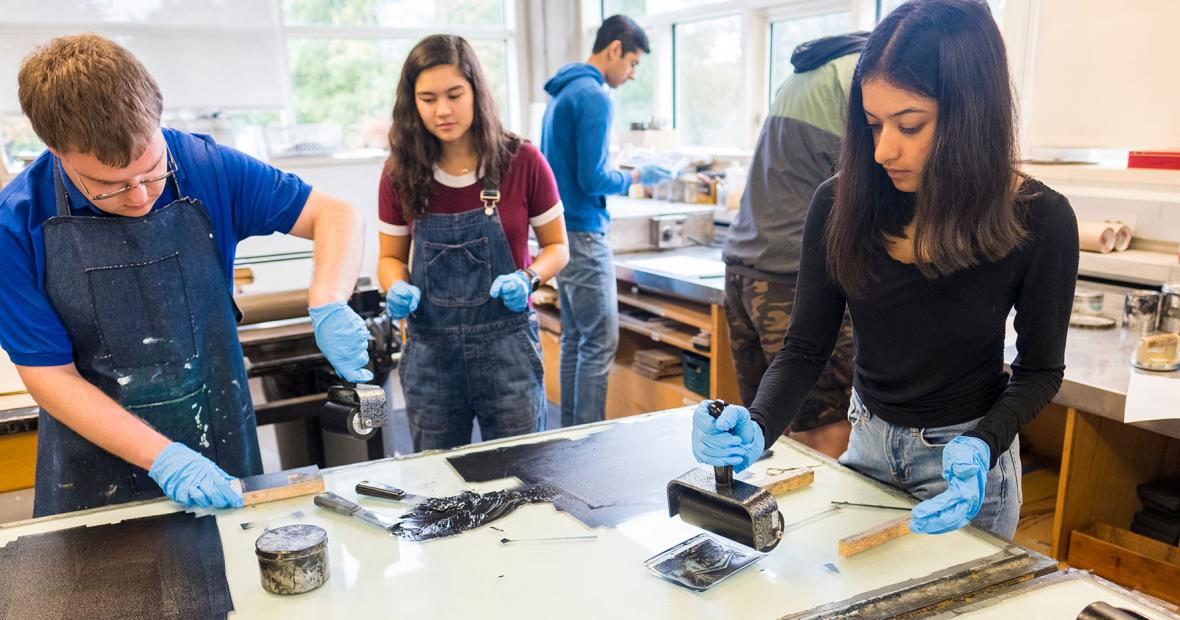 Exploring the unexpected is expected at Grinnell, and the Evolution of Technology course taught by historian Michael Guenther delivers.

The classroom is stocked with smartboards, laptops, and big screens, yet students engage in discussion, not devices.

The course uses no textbook, yet examines early book- and print-making technologies and stone tools and flintknapping through hands-on demonstrations.

“We've been analyzing what the word ‘technology’ means and thinking about how overlooked technologies impact our lives,” says Oona Miller ’21 of Madison, Wisconsin.  “Most people wouldn’t think of a doorknob, a bicycle, or a root cellar as technology, but they’re inventions that have changed humans’ lives. There’s a lot of reading involved in this course, but the discussions we have about the readings are always fascinating.”

For example, students in the popular Technology Studies Concentration class debate the

These lively discussions, prompted by assigned readings posted on a shared digital blackboard,   are guided by Guenther, who encourages students to “approach the subjects as scholars do — i.e., thinking about a set of issues over a period of time, debating your ideas with colleagues, and developing your own distinct perspective.” In a final independent project, each student chooses to analyze an innovation within a tech development era and demonstrate their ability to think critically and creatively. 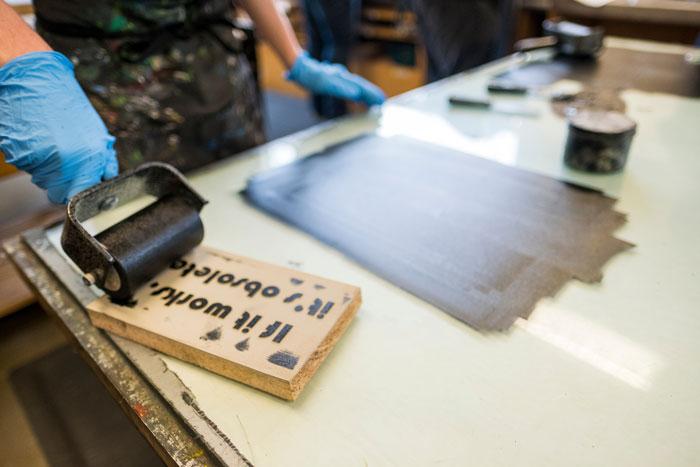 Miller came to Grinnell planning to be a computer science major, fell in love with English and chose the course because “I still want to study computers, the digital age, and anthropology, though. The tech studies concentration includes all of that, so I'll get to do a bit of everything I love.” For her independent project, Miller plans to investigate “technology that humans have used to communicate with each other, such as the printing press and typewriter, and how those inventions have shaped human history and our present-day view of the world.”

Mark Duncan ’19, a political science and religious studies double major from Phoenix, chose the course as a user and for the wide range of topics. “What has surprised me most is the number of modifications that have been made over the years in certain technologies — from the paper clip to the refrigerator and the book — to get to the technologies we have today.” Duncan plans his final project on the record player or phonograph in the early and mid-20th century.

Evolution of Technology was created in the late 1990s by a group of cross-disciplinary faculty members to serve as the foundational course for the concentration and for other students who wanted an introduction to technology from various liberal-arts perspectives. From the beginning, the class has been team-taught by faculty who share their expertise and approach to technology methodologies.

One of the course’s most popular sessions — for students and Guenther alike — is anthropologist John Whittaker’s demonstration of flintknapping and stone tools. Whittaker, who helped develop the initial course, leads students through the process of using flint to cut leather and wood and create fire. “John makes the subject come alive and shows them how important it is to experiment with recreating those tools so that they can learn from the process and not simply read about it,” Guenther says.

Fall 2018 students got a firsthand reminder of one of Grinnell’s most notable alumni, Robert N. Noyce ’49, co-inventor of the integrated circuit and co-founder of Intel. The Robert N. Noyce ’49 Science Center, adjacent to their classroom, is named for the innovator who was awarded Iowa’s highest civilian honor in October. Artifacts in the Noyce Science Center physics museum and the local Grinnell Historical Museum also allow students to research the history of a technology and propose exhibits.