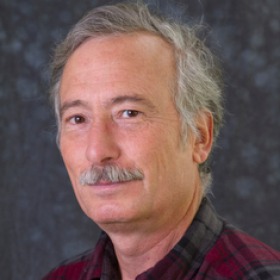 John Whittaker (BA Cornell U. 1975, PHD U. of Arizona 1984) has been teaching at Grinnell since 1984. He considers himself an anthropological archaeologist, which means that while he prefers working with ancient people, he considers himself free to snoop into any aspect of human life, and all people living and dead are fair game. With Kathy Kamp, he conducts the summer archaeological field school near Flagstaff, Arizona, and the prehistoric Southwest is his research heartland. They have also worked on Maya sites in Belize and maintain an interest in the Middle East. John's technical expertise is in prehistoric technologies, especially flintknapping and stone tool analysis, early agriculture, and atlatls, or spearthrowers. Flintknapping: Making and Understanding Stone Tools (1994) explains how stone tools are made and how they can be analyzed archaeologically. American Flintknappers: Stone Age Art in the Age of Computers (U. Texas 2004) is an ethnography of modern non-academic flintknappers. He teaches Introduction to Anthropology and mostly archaeological courses such as Archaeological Field Methods, North American Archaeology, and Old World Prehistory, and prefers courses where he can include class projects like processing and eating acorns, digging pits and storing corn in them, making dugout canoes with bronze age axes, and firing pottery with cow pies in his backyard. Coach Whittaker also promotes the Grinnell College Raging Cows, the world's first collegiate atlatl team, which hosts an annual spear throwing competition.

More information on John Whittaker’s newest book, “American Flintknappers,” can be found at The University of Texas Press.

Weapon Trials: The Atlatl and Experiments in Hunting Technology

On a warm day late in September, my North American Archaeology class sits on the sidewalk in front of Goodnow Hall and grinds acorns. In this part of the course, we are discussing pre-agricultural foraging people and the different ways of life that were shaped by local food resources. The prehistoric Californians and their recent descendants supported relatively large and stable populations not by raising corn, but by gathering acorns. The complete article can be found in the Anthropology Spring 2010 Newsletter.

Professor Whittaker shows students how to start a fire with flint and steel in his North American Archaeology class.