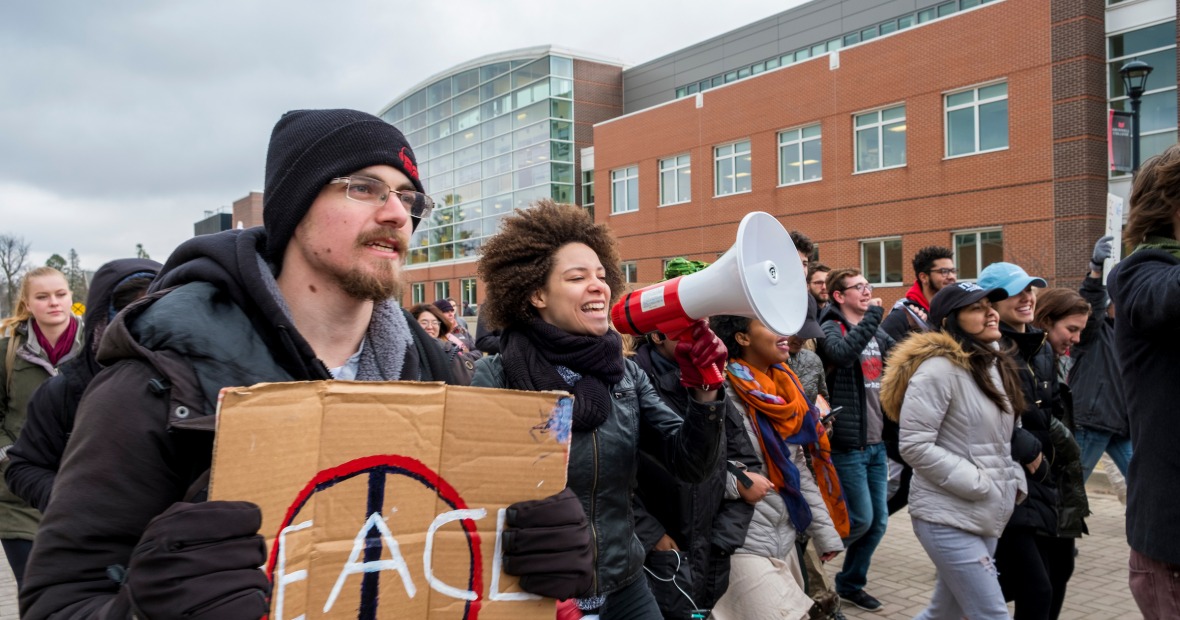 If you’re interested in making the world a better place, Introduction to Peace and Conflict Studies is a class where you’ll develop flexibility and nimbleness to pursue your vision.

Peace is one of those concepts that seems simple — it’s the absence of conflict, right? As in peace, not war.

“A lot of us tend to think of conflict as bad,” says Tim Dobe, professor of religious studies, who also teaches in the Peace and Conflict Studies Concentration. “We equate conflict with war and [physical] violence, what we call direct violence in peace studies. A major perspective of peace studies [is] that you need to dis-articulate violence from conflict.”

Conflict and violence are not the same. Conflict can, in fact, be useful.

One of the overall goals of Introduction to Peace and Conflict Studies “is to normalize conflict,” Dobe says. “Conflict is part of everyday life. It's inevitable and it's necessary to engage conflict.”

What if there is no conflict?

In class, Dobe uses Martin Luther King Jr.’s “Letter from a Birmingham Jail” to illustrate. “[King] says very clearly to the white moderates that are criticizing his methods: ‘You believe in negative peace, which is the absence of conflict, and that will not bring justice.’”

Positive peace, or “justpeace,” works toward a constructive vision. King wasn’t fighting just to fight. He had a vision. He was fighting for civil and economic rights for black Americans.

Gandhi also had a constructive vision. The British were harvesting a lot of cotton from India using indentured labor, shipping that cotton back to England, making textiles, and then sending the textiles back to India to sell to Indians.

“It's all part of the mercantile imperialism,” Dobe says. “Gandhi said, ‘This is absurd. It’s our cotton, which they’re now profiting off of.’ In addition to protesting by burning British textiles, he said, ‘We don't need their cotton, we can spin ourselves.’” That’s positive peace in practice.

For Sophie Jackson ’22, learning about different kinds of peace “really expanded my horizons by helping me see how some of the work I’m doing right now [at Crisis Intervention Services, a shelter that serves survivors of domestic assault and sexual assault] relates very closely with the international relations work I’d like to do in the future.”

Both the intro course and the field of peace and conflict studies are interdisciplinary. At Grinnell, the concentration draws faculty from political science, sociology, biology, anthropology, and religious studies.

Study Peace as a Scholar-Activist or Activist-Scholar

Learning about the various fields involved in and the theories behind peace studies, like justpeace, is an important part of the course. But another important part is learning how to put it into action.

That’s where guest speakers like activist Srdja Popovic come in. As a college student in the 1990s, Popovic was co-founder of Otpor!, a Serbian resistance group that worked nonviolently against the regime of Slobodan Milosevic, then president of Serbia. Milosevic was responsible for nearly a decade of warfare in the Balkans and was being tried for genocide, crimes against humanity, and war crimes at The Hague when he died in 2006.

Popovic co-founded the Center for Applied Nonviolent Strategies and Action (CANVAS), a nonprofit that helps teach people how to be successful activists. He was directly involved with the Arab Spring, for example. He’s spoken at Grinnell several times.

Dobe invited Popovic to campus for two weeks to train his Intro to Peace and Conflict Studies students in his methods.

“There’s this tension when you bring activists in,” Dobe says. “What is their role? What is the outcome of the training? Do you have to enact it in order to make it complete?” He discussed those questions with students.

Alex Johnson ’20 is a biological chemistry major from Iowa “who’s not super into social justice.” He says, “For me a lot of the topics felt foreign, so having someone who overthrew a dictator through a peaceful approach physically come to Grinnell and talk about the work he does was a really cool experience. It was one of the highlights of the class.”

Introduction to Peace and Conflict Studies is offered every year and has no prerequisites.

Learn more about the concentration and its requirements.