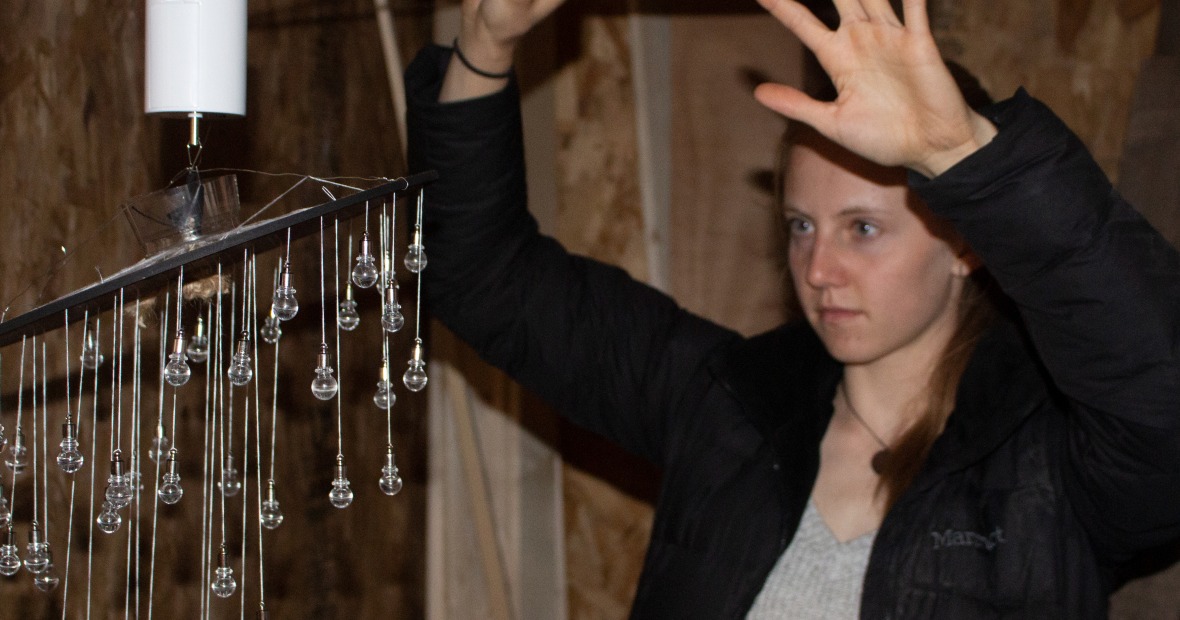 In a spring event sponsored by the Wilson Center for Innovation and Leadership, artists from Grinnell College and the town of Grinnell formed teams to have a moving experience.

This doesn’t mean the artists were feeling strong emotions—though that may have happened. Rather, the teams took part in the College’s Kinetic Sculpture Challenge. Participating teams collaborated on original artworks that incorporated motion as part of their effect. The competition, which is held each spring, is a part of the Wilson Center’s ongoing effort to help students exercise their creativity, teamwork, failure, and presentation skills, as part of their development as leaders and innovators.

In an interview last spring with the Scarlet & Black, Wilson Center Director Monty Roper explained the Center’s ambitions with the Challenge: “We want opportunities for students to try and fail and retry in contexts in which their grade is not on the line,” he said. “Developing leadership skills and innovation skills requires trial and error and failure and learning and iteration. … [That can be] fun. It’s a chance to work in teams and teamwork we always promote as well, and you’re not going to get in trouble if things go terribly wrong. In fact, you’ll probably learn something.”

Teams registered for the Kinetic Sculpture Challenge each received a budget of up to $200 and access to materials and resources from the Maker Lab (MLAB), a collaborative space that the Wilson Center put together in the town of Grinnell in partnership with the Grinnell Area Arts Council. The MLAB has high-end tools for shaping wood and metal, as well as a sewing machine, welding kit, and a suite of equipment for doing 3D scanning, carving, and printing. Kinetic Sculpture Challenge teams had three weeks to design and construct their artwork.

The sculptures were presented at a final presentation at The Stew, where judges Sam Rebelsky and Claire Frances considered them for a share of $1000 in prizes. The presentation saw four sculptures from a mix of college and town teams. The winning sculpture was created by Mike, Cadel. and Lindsay Conner and received a $400 prize. The other three sculptures tied for runner up and were judged as “The Moire-est,” “The Most Chaotic,” and “The Most Alive.”  Each group received $200 in prize money. Participants and judges also received challenge memorabilia produced in the MLab.

Roper looks forward to the spring 2020 event and hopes that even more teams will give it a shot. As he told the Scarlet & Black in 2019, “If they try and fail, okay. Bring [your artwork] down and show us what you tried to do. We’ll still reimburse you if it doesn’t work out... Sometimes it’s fun to hear that it didn’t quite work the way you wanted, but it’s [also] fun to see what you were thinking about and what you came up with… Just give it a shot and give it what you’ve got.”