Framing the issue of racial inequality around the victims of racial violence has an impact on how Americans view the issue, according to the latest Grinnell College National Poll released September 2, 2020. The poll is a partnership between Grinnell College and nationally renowned pollster J. Ann Selzer of Selzer & Company.

Version A: How close do you think the country is to achieving full equality in everyday life for African Americans?

Version B: Earlier this year, a Black man named George Floyd died after having been detained by members of the Minneapolis police force. Two medical examiners ruled Floyd’s death a homicide. How close do you think the country is to achieving full equality in everyday life for African Americans?

The poll found that reminding respondents about Floyd’s death had a dramatic effect on their views about whether the United States is close to full equality in everyday life for African Americans. Overall, reminding respondents about Floyd’s death led to a 19 point decline, from 50 percent to 31 percent, among those who reported that the United States is “very close” “pretty close” or “already there” to full equality for African Americans. The decline was 13 points among white respondents, from 51 to 38%, and 25 points among non-white respondents, from 45 to 20%.

“One of the central aims of movements like Black Lives Matter and social media efforts like #SayTheirNames is ensuring that we think in very human and real terms about the realities of racial inequality,” said Caleb Elfenbein, an associate professor of history and religious studies at Grinnell College and a contributor to the poll. “Having a concrete example of everyday inequality for Black Americans makes it more difficult to think about equality in abstract terms.”

The poll shows that this is a highly effective way to remind white Americans that for many people in the United States, equality in everyday life is a far way off. It also shows that keeping concrete examples of inequality in public view empowers communities of color to speak more openly about inequality.

Respondents also weighed in on their approval of how President Trump is ensuring equal treatment for African Americans within the country. Overall, 49% say they disapprove while 39% say they approve. Eleven percent are not sure. As with many of the findings in this poll, race and party affiliation affect ratings of the president’s job performance.

Among non-white respondents, only 24% approve of the job the president is doing to ensure equal treatment of African Americans while 63% disapprove. Another 13% aren’t sure.

Fully 81% of those who identify as Republican or leaning Republican approve of how President Trump is ensuring equal treatment while only 4% of those identifying as Democrat or leaning Democrat approve.

Do you approve or disapprove of the job Donald Trump is doing with ensuring equal treatment for African Americans in the U.S.?
(n=1,012 U.S. adults, MoE= ± 3.1 percentage points) 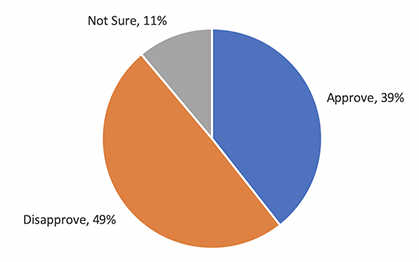 These results are significant because it is clear that a strong majority of non-white respondents do not perceive the current administration to be creating greater equality in everyday life for African Americans.

“For the vast majority of Americans who believe that treating people equally is a core element of what it means to be American, these results speak loud and clear,” Elfenbein said. “Listening to communities of color is an essential starting point to crafting policies that will promote equality for Black Americans and all communities of color in the United States. These results help us do just that.”

The consequences of COVID-19 are magnified among non-whites in America as it relates to economic impact, health concerns and childcare responsibilities.

When asked if this was something that has already happened or they expect to happen,

“Responses to the question about the threat of contracting COVID-19 confirms what we found elsewhere in the poll in matters concerning equality and inequality,” Elfenbein said. “Non-white respondents perceive COVID-19 as more of a threat because the virus has taken a greater toll on their communities. Every one of the metrics we used to measure the COVID-19 threat bears this out to a disturbing extent. Unequal access to health care, exacerbated in recent years, is a particularly important factor.”