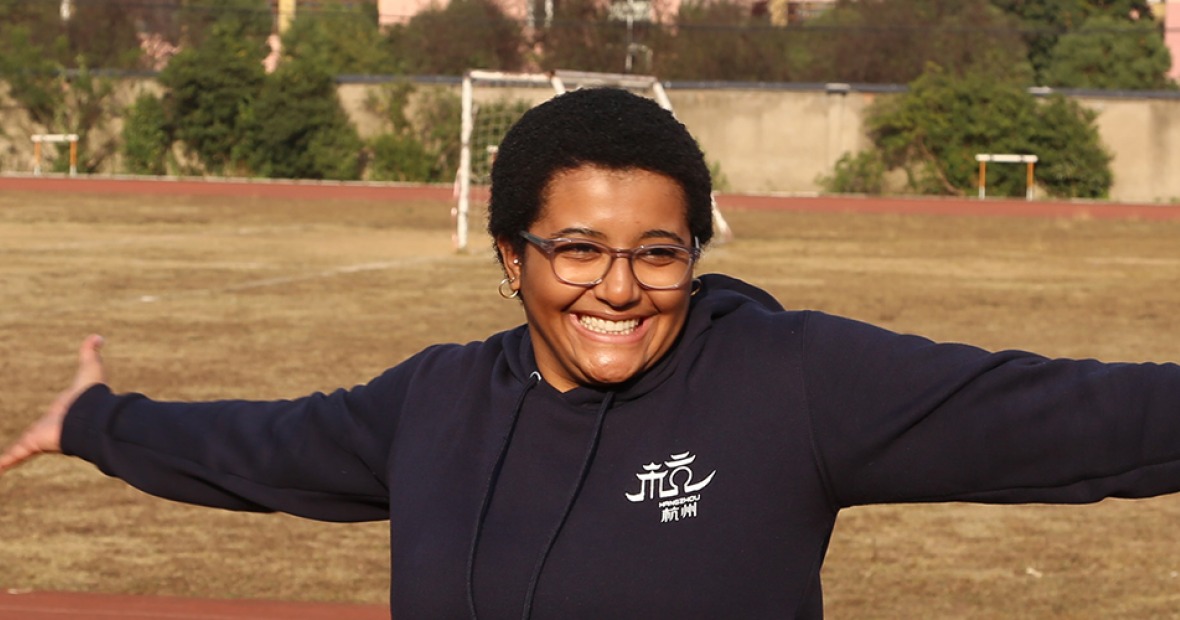 Lana Katai ’21 arrived at Grinnell knowing she wanted to study Chinese, which she began learning at age 12 in Dayton, Ohio. “I fell in love with it, so I stuck with it,” she says.

Her persistence paid off. As an incoming first-year student, Katai took a placement exam and tested into CHI 221: Intermediate Chinese, a second-year course.

During Katai’s second year, she was ready for CHI 331: Advanced Chinese. “It was the hardest class I’ve ever taken at Grinnell College,” she says. During that class, Katai made the intellectual leap that language students yearn for.

“I was able to speak and listen and read without thinking about it,” Katai says. “It was so difficult, but it was such a great academic experience.”

Each major at Grinnell has its own requirements, but similar to the curriculum overall, it can also be tailored to an individual’s specific interests. One way Katai personalized her academic experience in Chinese was by studying abroad.

She participated in the Middlebury Schools Abroad program, one of four Grinnell-approved study-abroad programs in China. She spent the fall semester of her third year (fall 2019) in Hangzhou, China.

Katai’s program included the chance to research a topic of her choice over the course of the semester. She’s long been interested in China’s education system and had previously taught in China a couple of times. So she focused on an in-depth study of China’s college entrance exam system.

Katai found the topic and the research experience so compelling, she says, that “I wanted to take an even deeper dive into the college entrance exam system and the impact it has on high school students.”

Personalized Her Academic Experience Even More with an Independent Study

Katai decided to take that deeper dive by designing a 4-credit independent study the following semester. “It gave me so much agency over what I wanted to do,” she says. “I wanted a guided process that was led by me.”

She worked with Qiaomei Tang, assistant professor of Chinese, and met with her every other week. They agreed that a 10-page research paper in Mandarin Chinese would be Katai’s final product.

Katai started by watching a Chinese TV show and film to see how the entrance exam was portrayed in modern media. Then she turned her attention to scholarly sources—some in Chinese and some in English.

“I tried not to think in English and then translate,” she says. “I wanted only to write in Chinese. My notes were in Chinese so that transition became smoother.”

Katai wanted to develop her written, formal skills in Chinese. Her focus was research-level language skills that would improve her artillery of skills for use in her future working life.

Professor Tang offered lots of correction on how Katai was writing things and how she could write them better. “It was so useful and so important for the level of writing I sought to do,” Katai says.

“When I started, I was very comfortable in my writing style, but that had to completely change,” she says, because what she and Tang did not want was something written in English first and translated into Chinese after. “Professor Tang pushed me to be more expressive and creative,” Katai adds.

Tang encouraged Katai to submit her paper for publication to the University of Iowa’s JUHE Supplement magazine, which publishes essays written by learners of Chinese. Katai’s paper was accepted for publication in 2021, one of 42 selected from among 119 submissions from 34 programs.

Katai’s plans for the future include law school and then working for a company where she’ll be able to use her language skills and cultural competency.