While Americans have high ideals for what makes up our democracy, a new Grinnell College National Poll shows our country gets failing grades when it comes to executing those ideals in real life. The poll, a partnership between Grinnell College and J. Ann Selzer of Selzer & Company, was released Wednesday, March 31, 2021.

Americans overwhelmingly believe certain principles are a foundation of American life, including free speech (82% say it is very important), peaceful transfer of power (80%), free and fair elections conducted without fraud (92%), and equal treatment regardless of race, religion, and other traits (92%). But when asked how well those ideals are playing out in 2021, Americans believe we are falling short. 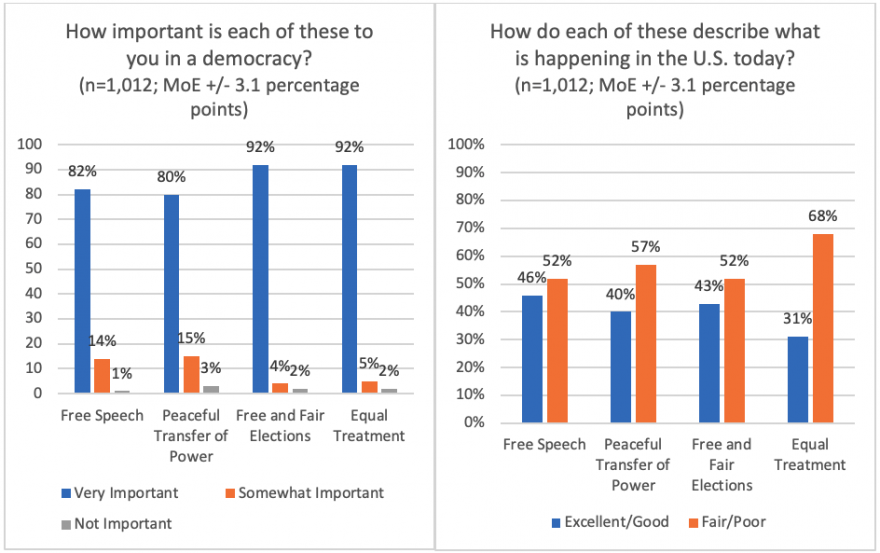 Only 46% of Americans responded that “free speech” was an excellent or good fit for describing what is happening in the U.S. today. The country gets similarly low marks when referring to the peaceful transition of power (40% say excellent or good fit), free and fair elections conducted without fraud (43%) and equal treatment regardless of race, religion, or other traits (31%).

“This is a below-average report card for our country,” said Grinnell College Associate Professor of Political Science Danielle Lussier. “Democracies erode when there is a gap between what people expect and what the government provides. A majority of Americans believe the United States is falling short of living up to democratic values they see as important. We know from countries where democracy has failed that this is a worrisome signal about the health of our democracy.” 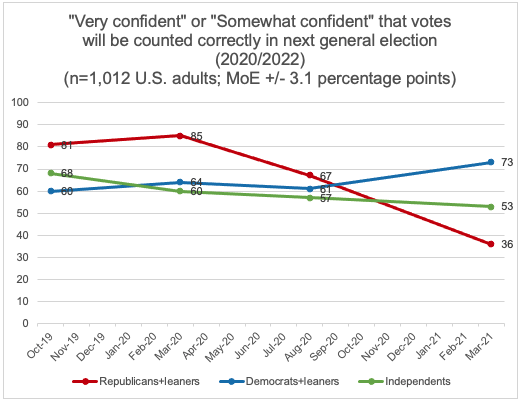 “We have been polling Americans’ confidence in the voting process for two years now, and there has been a sudden and serious erosion in the belief that votes will be counted accurately,” said Peter Hanson, Associate Professor of Political Science and Director of the Grinnell College National Poll. “While confidence in elections has actually risen slightly among Democrats, the drop among Republicans is staggering and directly tied to claims of fraud in the 2020 election.”

There is a marked partisan divide in the perspectives on the 2020 presidential election outcome: Thirty-five percent of Americans believe there was enough voter fraud in the election to change the outcome. That includes 64% of Republicans – and 72% of those who voted for Donald Trump in 2020. By comparison, only five percent of those who voted for Joe Biden believe that there was enough fraud to change the outcome. 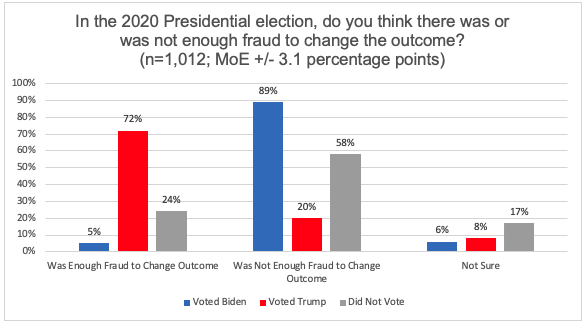 “The fact that 35% of Americans – including 72 percent of Trump voters – say there was enough fraud to swing the outcome of the 2020 election even though this claim has been repeatedly debunked is deeply troubling,” Hanson said. “American democracy depends on the belief that votes are counted accurately. Once that faith has been called into question, it will be very hard to restore.”

“While many have hoped that claims of fraud in 2020 would be a historical hiccup in an otherwise longstanding tradition of peaceful transitions of power, these findings suggest that the U.S. could be heading more steeply away from democracy,” Lussier said. “I believe this survey is a warning – the erosion of trust in American elections is particularly worrisome.”

“With state legislatures moving bills that affect how voters can cast their votes, it’s useful to see there is pushback among the constituents,” said J. Ann Selzer of Selzer & Company. “Majorities in every region oppose eliminating laws that allow voters to cast ballots before Election Day, and that is the case in states with GOP governors and Democratic governors. The same goes for eliminating laws that allow votes to be cast by mail.”

In other notable findings from the Grinnell College National Poll:

The Grinnell College National Poll (Grinnell-Selzer), conducted March 24-28, 2021, is based on telephone interviews with 1,012 U.S. adults ages 18 or older, with a maximum margin of error of plus or minus 3.1 percentage points.

While Americans have high ideals for what makes up our democracy, a new Grinnell College National Poll shows our country gets failing grades when it comes to executing those ideals in real life.

As an element of American life, a majority of people in the country view the state of race relations as mostly bad according to the newest edition of the Grinnell College National Poll.