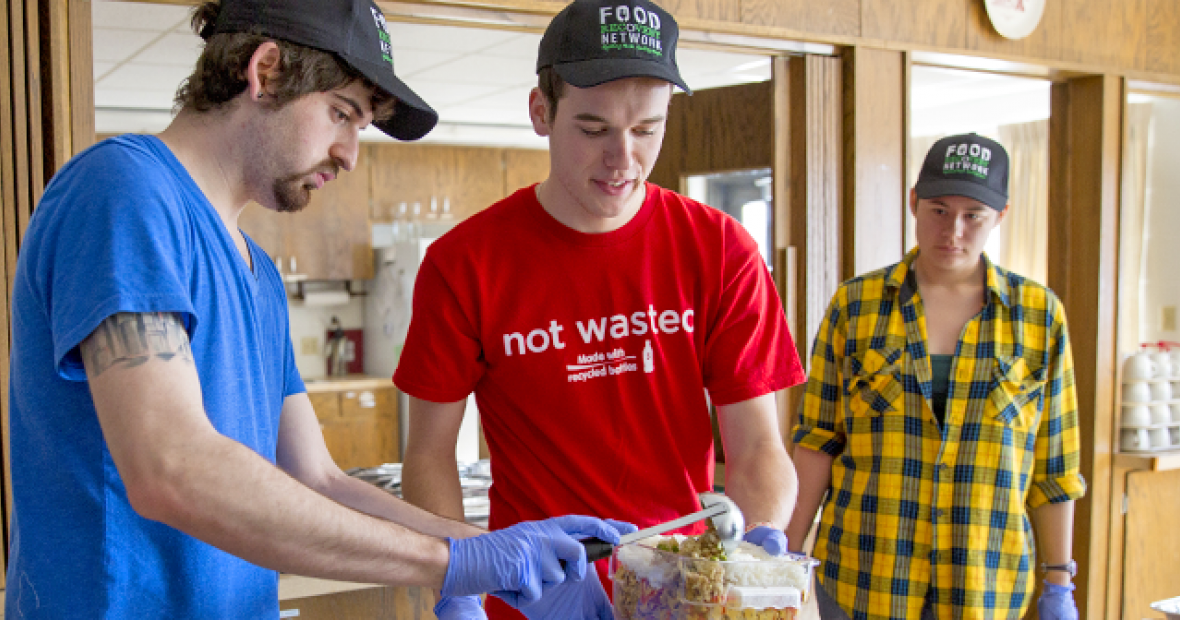 More than 3,350 pounds of food — about the weight of a Ford Mustang — was donated to families in the Grinnell community during the 2013­–14 school year.

This intensive effort was led by Dylan Bondy ’16, who started the Grinnell College chapter of the Food Recovery Network (FRN) in May 2013. FRN is a national organization that works with college students to fight food waste and hunger.

Bondy, who serves as the Grinnell chapter president of FRN, works with the College dining hall to recover leftovers to feed local people in need.

How Food Recovery and Distribution Works

College dining hall staff members pack leftover food from the kitchen and the line — where food is served to students — into large, single-use aluminum trays.

After each meal, a student volunteer picks up the food, weighs it — to record in FRN’s national database — and puts it into the student organization’s refrigerator in the Joe Rosenfield ’25 Center.

The next day, three students drive that food a few blocks to the First Presbyterian Church. With the help of church volunteers, especially Dave and Linda Cranston, the food is distributed to people who need it. This happens five days a week during the school year.

Another important partner is Mid-Iowa Community Action, which verifies that people are eligible for food assistance and provides vouchers for their weekly food pickups.

This smoothly operating partnership and distribution network didn’t exist a year ago. Thanks to the help of many people in the community and on campus, including the Center for Religion, Spirituality, and Social Justice, the project is going strong.

Bondy says, “The work we’re doing in the community is substantive. We are out there in the field, meeting people in the community, putting food in their hands. FRN volunteers (or FRNds) get to form meaningful bonds with the people of Grinnell and help support their livelihood.”

The program is expanding for 2014–15. The Hy-Vee grocery store in Grinnell is a confirmed new partner, Bondy says. Hy-Vee will donate food that is past its sell-by date, but is still good.

How the Idea Evolved 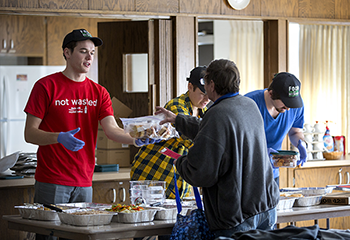 When Bondy was a first-year student, he saw students loading trays with way more food than they could eat. The uneaten food — full slices of pizza, burgers, chicken breasts, whole salads — was composted or thrown out.

Bondy wanted to do something about the waste. He was talking to his mom about it one day. She told him about an interview she’d seen with a guy named Ben Simon from the Food Recovery Network, who spoke about of his efforts to start a national student movement for food recovery and waste reduction. She urged Bondy to get Grinnell involved.

“As soon as I found out about Food Recovery Network, I knew I had to bring it to our campus,” Bondy says. He worked with Mary Zheng ’15 to get the project going.

About 30 students volunteer their time and effort each semester. Additionally, more than 200 students subscribe to the College’s FRN email list.

One of the group’s early and ongoing efforts is to educate students about food waste. Chapter volunteers weigh and evaluate food from student trays, which can’t be recovered for use.

This activity is paired with a “Take what you’ll eat” campaign. Bondy even took a documentary film short course and made a film about tray waste at Grinnell.

Bondy says, “For a while, I definitely spent more time on FRN than academics because I could see the tangible impact, that students were making really valuable changes and connections in the greater community. As a sociology major, I often get sick of just seeing social change in the textbook — it’s all about the real world application, making a concrete change.”

Five members of Grinnell’s FRN chapter attended the Food Waste & Hunger Summit in April 2014, the first of its kind. Students from all over the U.S. discussed strategies for reducing hunger and food waste in their communities. “We got to see a new national movement that’s making a substantive difference around the U.S.,” Bondy says.

Because Grinnell College has the first successful rural food recovery model in the Food Recovery Network, Bondy led a session entitled “Innovative Solutions to Rural Hunger,” in which he shared the chapter’s story and provided a sort of road map to rural food recovery.

“Through student food recovery efforts,” Bondy says, “our generation is going to make the change this nation needs, and we’re going to see hunger in the U.S. be greatly alleviated.”

Mary Zheng ’15, from from Gainesville, Va., is majoring in anthropology and Chinese.