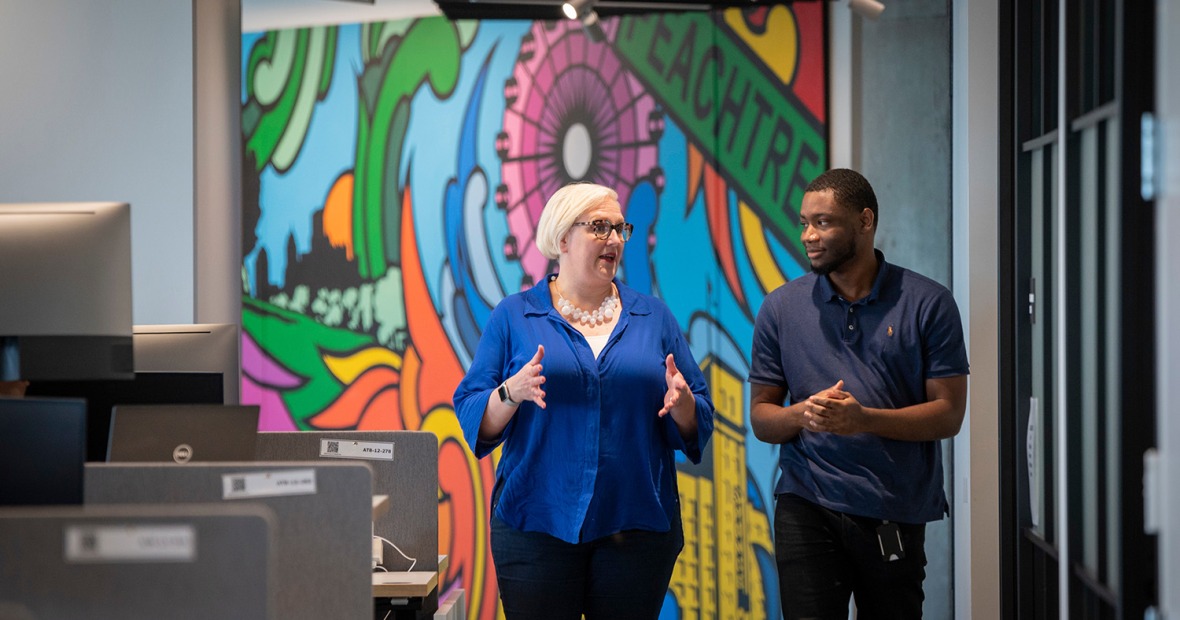 Carlton Segbefia ’21 is using his computer science skills to help others and to make the world a better place. He loves being able to use technology to solve a problem and potentially improve someone’s life.

Segbefia came to Grinnell College from his home in Accra, Ghana, with a strong desire to study computer science and a dream of owning his own business someday.

He had enjoyed his computer sciences classes in high school, and he couldn’t wait to learn more. “I realized I really enjoyed creating things with technology,” he says.

Segbefia chose Grinnell, a small liberal arts college, because he knew it would give him opportunities to explore other academic areas in addition to computer science. Segbefia took courses in the arts, global development studies, and more, before choosing a double major in computer science and sociology.

This well-rounded liberal arts curriculum, along with his computer science studies, turned out to be exactly what Segbefia was hoping for.

“I think it changed how I view the world,” he says. “We live in a complicated technological age, and through my computer science knowledge, I can more clearly see how this world works. This in turn makes it easier for me to see how I can impact and improve it.”

The computer science faculty and staff at Grinnell — especially Professor Henry Walker and Peer Education Coordinator Sarah Dahbly Albright — supported Segbefia throughout his studies. Walker helped him understand the course material and how it applied to the larger world. Dahbly Albright offered guidance on the resources available at Grinnell and encouraged him to be active in Grinnell’s Code Club, which teaches middle schoolers in Grinnell to code. Segbefia served as a Code Club volunteer and manager, organizing lessons and volunteers.

Though he made the most of his time at Grinnell and was heavily engaged in his own education, Segbefia says if he were once again a first-year student just starting his studies at Grinnell, he’d take advantage of even more of what the College has to offer. “Grinnell has a lot of resources — find them and use them,” he advises.

In his time at Grinnell, Segbefia participated in four internships/externships, with support from the Center for Careers, Life, and Service. One of these took him to Detroit, where he worked with Ben Mothershead ’16 at a start-up that offers a home energy management solution. Segbefia was impressed by the creativity and dedication of the people he worked with at Powerley, especially Mothershead.

We live in a complicated technological age, and through my computer science knowledge, I can more clearly see how this world works. This in turn makes it easier for me to see how I can impact and improve it.

When Segbefia discovered Grinnell’s Wilson Program for Innovation and Leadership, he realized he had found a space where he could grow and gain skills and knowledge. The Wilson Center sponsors a wide variety of programs that help students develop key skills for career success.

Segbefia participated in many Wilson Center programs, including: HackGC, a weekend-long event in which teams of Grinnellians collaborate, innovate, and build a solution to help alleviate a social justice issue; Pioneer Weekend, a three-day innovation and pitch competition for students to pitch a business or nonprofit plan; and more. In addition, Segbefia worked for the center and helped develop and run the Stew Makerspace, a hands-on workshop stocked with woodworking tools, 3-D printers, and more.

In this role, Segbefia developed the online systems used to run the Stew Makerspace. With Gyan Prayaga ’21, he created a web app to track users and their safety training. He later expanded the system and laid the foundation for future students to make it open source so makerspaces around the world could use it. As a senior, Segbefia won the Department of Computer Science’s Robert N. Noyce Award for his role in developing the Wilson Center’s makerspace and the online systems used to manage it.

In 2021, Segbefia was part of a team that took second place at Pioneer Weekend — with Mai Phuong Vu ’21, he developed an app called “Mate” that helps people find roommates for off-campus living. He was also part of a team that created an app called “Pronto!,” a resource to help people become active in the Black Lives Matter movement. The app is organized by city and gives users information about how they can support the movement, either by volunteering or providing financial support.

With the skills he learned at Grinnell and by taking advantage of so many of the opportunities afforded him, Segbefia was well prepared to pursue his career after graduation. In his current position as an analyst and software engineer at a major financial services firm, Segbefia is not only navigating our complex world, but also working to make a positive impact for the benefit of all.