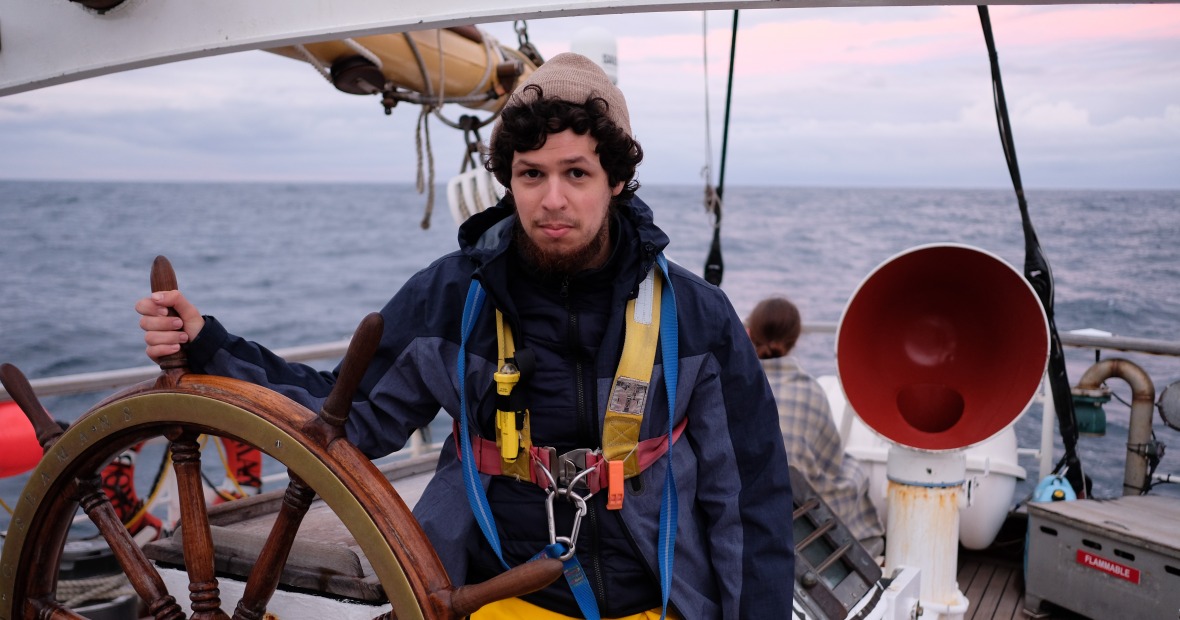 Isaac Ferber ’20 steers the 134-foot-long sailing ship during one of his watches.

Standing watch on a 134-foot-long sailboat from 1 to 7 a.m., Isaac Ferber sighted what appeared to be a fast line of light traveling near the ocean surface off the coast of New Zealand.

“It was cloudy that night. I heard what sounded like something breathing in the water, which is somewhat alarming in the pitch dark,” Ferber says. After scanning the water, he spotted a dolphin maneuvering in such a way as to cause water-suspended bacteria to glow brightly due to fluorescence. He figured they were likely from the Vibrionaceae family of bacteria because he had learned about their fluorescent properties in his classes aboard ship.

Ferber, a biology and anthropology double major from Omaha, Nebraska, was one of 26 undergraduates from across the United States who sailed through New Zealand’s coastal waters on the SSV Robert C. Seamans as part of SEA Semester: The Global Ocean.

Shipboard classes gave students the opportunity to present and compare their research findings. Ferber examined the effect of climate change on pteropods’ ability to form shells. Pteropods, also known as sea butterflies, are free-swimming snails or slugs with wing-like extensions.

“I love being outdoors to learn about things,” Ferber says, “which is more unpredictable yet more exciting than lab work.”

Appreciating Differences Up Close, Through Tragedy

During a port stop in Wellington, when the students were free to roam the capital city, Ferber was standing near a cafe when news broke about a terrorist attack at two crowded mosques in Christchurch that killed 50 worshipers and injured dozens more.

“I felt a deep sense of loss as I overheard the discussions of New Zealanders in a cafe as I walked by,” Ferber wrote in his blog. “…All I've learned about this country in my brief time here hasn't prepared me for being able to process the immediate ramifications of this event outside of the all-too-familiar sense of tragedy.

“Digesting these events so far from home is a harrowing task, but at the same time it has shown me that although people mourn in very different ways, everyone mourns.

Aboard the Robert C. Seamans, the students formed an integral part of the round-the-clock ship’s crew in addition to conducting their studies and research. Under the supervision of professional mariners and oceanographers, they stood watch six hours each day, processed oceanographic samples, and navigated by the stars, among other duties.

Adhering to this rigorous schedule proved challenging, especially for the many students battling frequent bouts of seasickness and exhaustion. To better cope with the situation, Ferber decided he needed to develop a higher degree of empathy.

He achieved his goal by changing his mindset. “It is important that you be thankful for the smallest things,” he explains, “and that you have to not only take care of yourself but also be more understanding towards others.”

The College offers countless opportunities for student research and more than half of our students engage in semester- or year-long off-campus study. Students who engage in off-campus study typically find that it fosters their engagement with other cultures and promotes personal development in life-changing ways.

These experiences help prepare Grinnellians to navigate the world’s complexities and contribute to the common good.

Ferber concludes the lessons he learned from SEA Semester – academic, extracurricular, and life – surpassed his expectations, and pointed him in a new direction.

When he returns to campus for fall semester, Ferber plans to shift his focus from lab work to field research on organisms and animal behavior.