Understanding the World Through the Lens of Chemistry 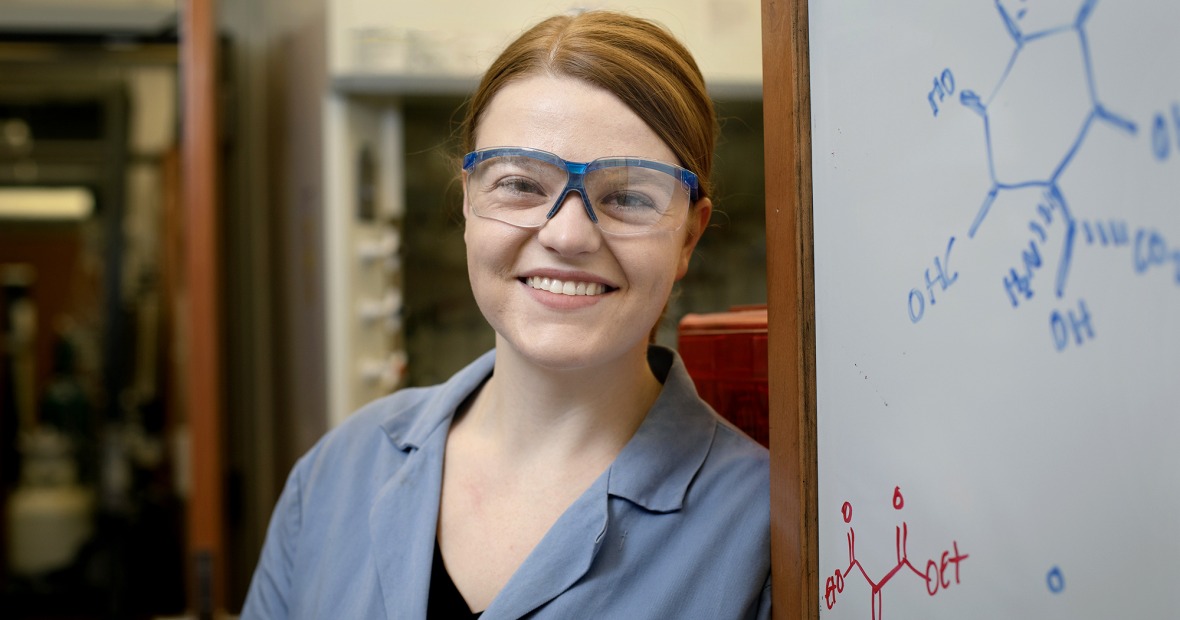 Chemistry is a distinct language of its own, says Jennifer Fulton ’15. During her time as a Grinnell student, Fulton learned that she enjoys seeing and understanding the world through the lens of chemistry, translating the field’s distinct language, and sharing it with others.

As a child growing up in Elgin, Ill., Fulton witnessed her father’s passion for his work as a chemical engineer. She developed a strong interest in science and dreamed of a career in the pharmaceutical industry, recognizing the great need for novel, best-in-class drugs to help patients in need. Fulton found her place at Grinnell, intending to major in chemistry and seek a career as a pharmacologist.

As a student at Grinnell, Fulton met with her academic and research adviser, Associate Professor Stephen Sieck. He predicted that Fulton would become an organic chemist within a year of their first meeting. Professor Sieck was right.

The pinnacle of Fulton’s academic career at Grinnell was conducting academic research with Professor Sieck. This hands-on experience was invaluable to Fulton and helped inspire her plans for the future. She realized that she could become an independent researcher and make a difference in the world. After graduating from Grinnell, Fulton pursued a Ph.D. in organic chemistry at the University of North Carolina-Chapel Hill, which she finished in 2020. She has since continued her career as a principal scientist in medicinal chemistry at Cogent Biosciences. In 2023, Fulton will return to Grinnell to present a departmental seminar. 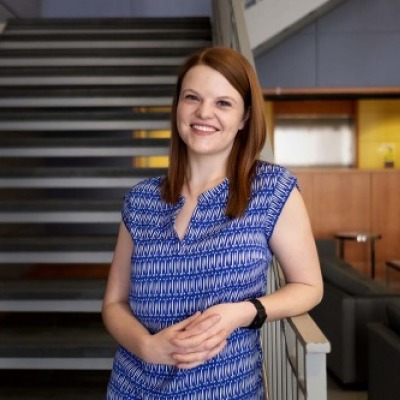 The chemistry department was where I could explore and feel totally at home.

Though her academic focus was on chemistry, Fulton certainly received a well-balanced liberal arts education at Grinnell. Along with rigorous scientific programs, Grinnellians can choose from a variety of challenging and exciting courses, majors, and concentrations. Fulton took full advantage of the available options to diversify her knowledge base beyond chemistry.

With guidance from the staff at Grinnell’s Center for Careers, Life, and Service (CLS), Fulton learned about paid research opportunities at top-tier universities. At the CLS, she also learned that graduate students in chemistry are often paid. These opportunities allowed Fulton to gain the necessary experience, further her education in her chosen field, and earn a living at the same time.

In her third year at Grinnell, Fulton won a Goldwater Scholarship with extensive help from the CLS and her research adviser, Professor Sieck.

We all have people who inspire us, challenge us, and cheer for us. Fulton says the list of people who helped her at Grinnell would be too long to read. She gives special recognition to three professors and staff members, without whose help she wouldn’t be where she is today.

Fulton says that Professor Sieck, her tutorial professor, academic adviser, and research adviser, helped lay the foundation for her future success in organic chemistry. With him, she learned countless skills, from conducting her first lab experiments to writing more concisely and becoming an independent researcher.

Fulton was nervous about taking physical chemistry, taught by Professor Elaine Marzluff. Marzluff made the challenging class accessible and fun. Marzluff shared the challenges she had faced as the only female Ph.D. student pursuing in physical chemistry in her program. The resilience and determination Marzluff demonstrated motivated Fulton to be part of efforts to increase diversity, equity, and retention within her graduate program at UNC and beyond.

Minna Mahlab, director of Grinnell’s Science Learning Center (SLC), was crucial in fostering Fulton’s love for chemistry. Fulton worked as a tutor and mentor at the SLC and acted as the lead student representative on a committee funded by the Howard Hughes Medical Institute (HHMI) to improve the well-being of second-year science students. Fulton says that Mahlab, who led the HHMI initiative at Grinnell, recognized and encouraged Fulton’s passion for teaching and helping others, inspiring Fulton to grow her skills and knowledge. This supportive professional relationship continues to this day.

When asked what advice she would give her younger self as a first-year at Grinnell, Fulton says this: you don’t have to plan your entire future today. Don’t limit yourself to the opportunities or classes you think are easily within reach; challenge yourself with courses outside your primary area of study. And, she adds, surround yourself with friends and mentors who will empower you to reach further than you think you can, as Fulton’s mentors did.

Learn more about majoring in Chemistry