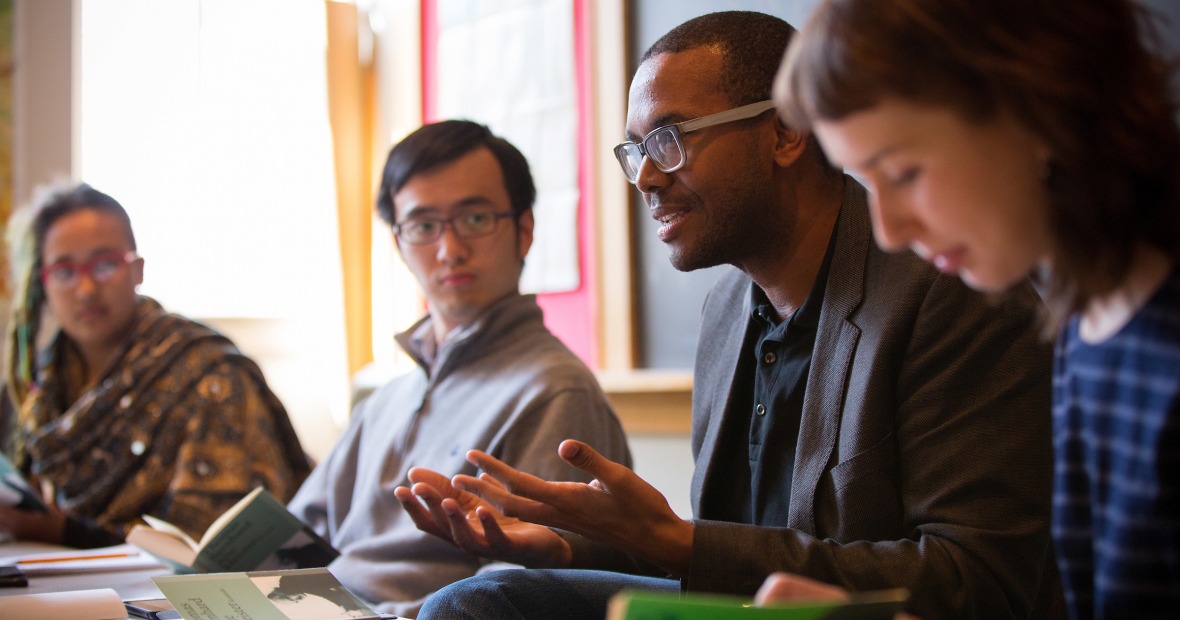 The knowledge and scholarship Vance Byrd will gain from the New Directions Fellowship will enhance his students’ learning experiences for years to come.

Vance Byrd, Frank and Roberta Furbush Scholar in German and associate professor and chair of the Department of German Studies, has received a $298,000 grant for a New Directions Fellowship from The Andrew W. Mellon Foundation.

He is the first Grinnell faculty member to be awarded this prestigious fellowship. The Foundation began awarding New Directions Fellowships in 2002 to enable highly accomplished faculty members in the humanities and humanistic social sciences to conduct serious interdisciplinary research level on the problems that interest them most.

Byrd’s fellowship plan will combine graduate seminars in art history and African American studies at Northwestern University and courses from University of Chicago scholars whose books have influenced his work. This training in these new fields will provide the foundation for the launch of Byrd’s new research project: Handmade History: Panoramas and Nineteenth-Century Global Cultures of Commemoration.

Grinnell’s Committee for the Support of Faculty Scholarship nominated Byrd based on the strength of his research proposal, his scholarly record, and the likely long-term impact his proposed training will have upon his research and teaching.

“I am pleased that the Mellon Foundation has provided us with this opportunity for our faculty,” says Michael Latham, former vice president for academic affairs and dean of the college. “We are grateful for the confidence this shows in Grinnell’s strength as a national liberal arts college. The fellowship also enhances the role of our faculty as experts, researchers, advisers, and mentors.”

Byrd, a scholar of 19th-century German and Austrian literature, aesthetics, culture, and visual arts, is one of 12 faculty members nationwide awarded New Directions Fellowships in 2019. He writes and teaches about history of the book and periodicals, museum studies, the environmental humanities, and graphic novels.

He also serves on the College’s Faculty Executive Council as the chair of the Humanities Division and has directed the Center for the Humanities. Additionally, he was elected director-at-large of the Goethe Society of North America, to the Modern Language Association (MLA) Delegate Assembly, and to the Executive Board of the MLA forum on 19th- and 20th-century German literature.

Byrd’s first book, A Pedagogy of Observation: Nineteenth-Century Panoramas, German Literature, and Reading Culture, centers on the emergence of a new type of visual language and self-fashioning in material culture adopted by Germans at the turn of the 19th century. The Germans took cues from their observations and interpretations of space at panorama shows.

By reading about what editors, newspaper correspondents, and writers referred to as “panoramas,” Byrd argues that Germans learned about a new representational medium and a new way to organize and produce knowledge about the scenes on display, even if they had never seen these marvels in person.

These written panoramas, so to speak, helped German readers visualize industrial transformations, urban development, scientific exploration, and new possibilities for social interactions. Through the immersive act of reading, Germans entered an experimental realm that fostered critical engagement with modern life before it was experienced firsthand.

Building upon this previous media studies research, Byrd’s new project will explore the origins of global commemorative culture and its relationship to the histories of nationalism and racism in the 19th century. His new book will focus on how battlefield artists working for prominent illustrated newspapers and magazines in Germany and the United States portrayed conflicts about emancipation and national unity.

Due to immigration and the emergent international business of commemoration, some of these German sketch artists went on to produce painted panoramas of the American Civil War and the Franco-Prussian War that were shown around the world. One group in Milwaukee created the Atlanta Cyclorama, an illuminated circular painting, 49 feet tall and longer than a football field. The work celebrated the Union victory in the Battle of Atlanta, which hastened the end of the Civil War.

“But when the painting moved South after a five-year run up North, new audiences flipped its meaning, bastardizing the spectacle into a curio of Confederate identity and a testament to white Southern pride,” according to an article in Atlanta magazine. The restored painting has become the centerpiece of the new Atlanta History Center, where it demonstrates how easily history can be distorted by a viewer’s preconceived notions.

The histories of these media and these artists form case studies on the global interconnection of material, capital, and human networks of media production, distribution, reception, and erasure in 19th-century commemorative culture, Byrd says. The panoramas they painted presented history as a continuous heroic narrative without contradictions. Indeed, the work of these German artists harnessed memory of events foundational for understanding how Americans and Germans saw themselves as part of a nation.

“With this project,” Byrd adds, “I will examine Germans’ contributions to national and international conversations about race. These have ongoing implications for how we understand not just memorials of the American Civil War but also, for example, the legacy of Germany’s colonial history in Africa.”