A Very Good Year for This Physics Major 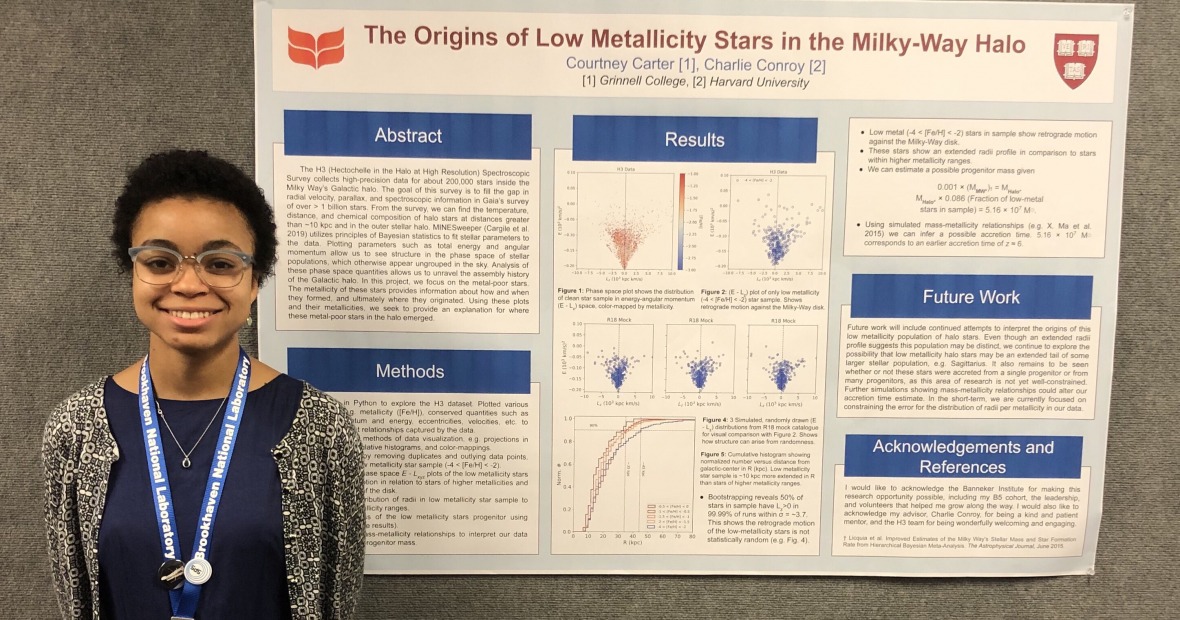 Physics major Courtney Carter ’21 has been having a very good year, delving deeply into research and pursuing her own ideas with confidence.

In the summer of 2019 she conducted research at Harvard University’s Banneker Institute. “I was working with big data from a telescope to try to understand the origins of these very, very low metal stars in the Milky Way's outer stellar halo,” Carter says. “We were trying to explore things like, what put these stars here? Was it one small dwarf galaxy that put them here? Was it many? When did it come in? How big was it?”

She worked with Charlie Conroy, professor of astronomy at Harvard. Her talk at the Center for Astrophysics summarizes her work.

In November, Carter attended the annual conference of the National Society of Black Physicists in Providence, Rhode Island, where she presented a poster about her summer research. Her presentation won the astronomy and astrophysics poster prize. The award included $250 plus registration and limited funding for an American Astronomical Society meeting in winter 2021.

Also during the fall semester, Carter presented her research during a seminar on campus. Afterward, she and Charlotte Christensen, assistant professor of physics, talked about how they could ask similar questions but from a simulation point of view.

That led to a spring 2020 Mentored Advanced Project (MAP) with Christensen. Carter is working on simulations of Milky Way-like galaxies. With the simulations, Carter says, “We have the power to turn back time and see what actually put [the galaxies] there. We're extrapolating about the past by using data from the present.”

In addition to the research aspect of the MAP, Carter wants to learn what graduate school in astronomy will be like. So she’s working problems from advanced textbooks about general galaxy formation. Christensen “has been really great about helping me get that into the MAP,” Carter says.

Physics from a Young Age

Physics and astronomy have been in Carter’s sights since she was 8 or 9 years old. She was addicted to watching the PBS series Nova. “One thing that really fascinated me was that people were exploring these questions related to the universe, not just the solar system or the planets, but the whole universe,” she says.

She didn’t connect that interest to a career until high school. “I started having an obsession with Stephen Hawking and this idea of being a cosmologist. That meant that I needed to do physics.”

At Grinnell she started with the introductory-level physics classes, which are “more lab-based,” she says. “Not just memorizing equations but really trying to get a sense of some general questions that you can apply to any physics problem so you figure out what’s going on. I thought that was really empowering, because all of a sudden you're given the tools to understand these very deep questions.”

Preparing Herself for a Career that Matters in Physics

One of the boldest things Carter did all year was to ask her summer 2019 adviser at Harvard if she could come back during the summer of 2020 to continue her research. He said yes. “The whole environment [last summer] was very conducive to learning and very welcoming of people at different experience levels,” Carter says.

Also this summer, she’ll work on fellowship applications for graduate school. She wants to pursue a doctorate at Harvard and study galactic archaeology — the kinds of questions she loves to ask about how the Milky Way formed.

Learn more about how and why Grinnell can help you accomplish your goals.