Whose Sculptures Are They? 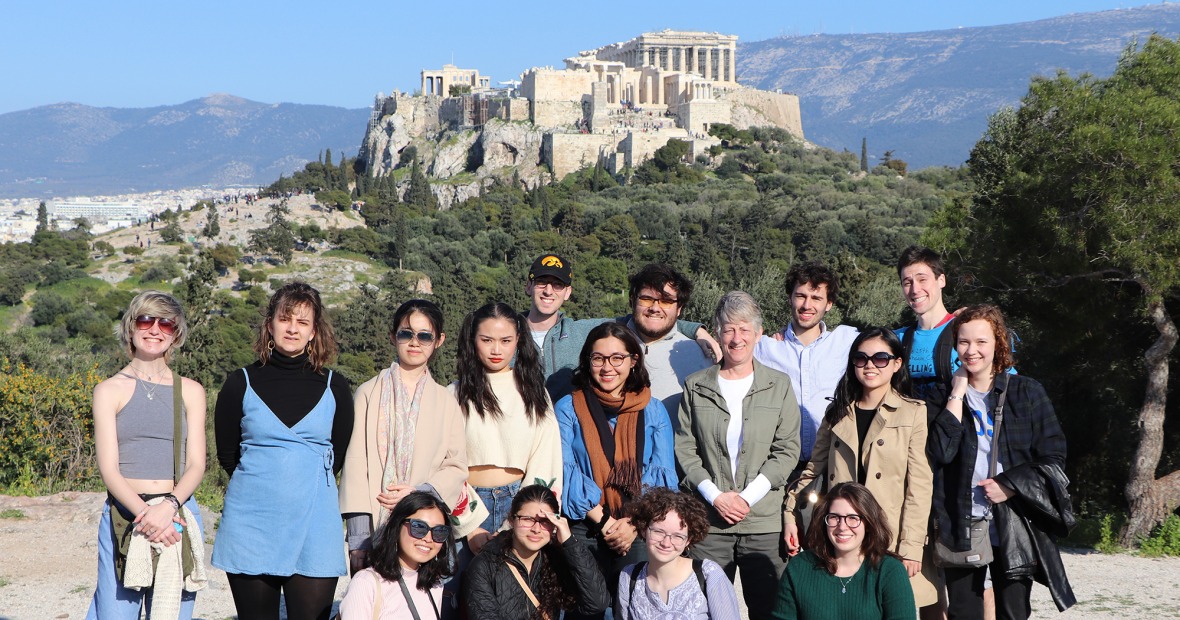 Does the chance to study a complex, international, and emotionally charged issue intrigue you?

What if you were able to tackle that issue with two experts? And travel with them to London and Greece to examine the heart of the dispute?

The course examined a core question: Who owns classical antiquities? In particular, the Parthenon sculptures. Is it the country where the artwork was originally created and displayed? Or the country that has owned the artwork for two centuries and exhibits it in one of its most prestigious museums?

What Are the Parthenon Sculptures?

In the early 19th century, Lord Elgin removed about half of the marble statues and friezes from the Parthenon, an ancient temple in Athens, Greece, and shipped them home to Britain. He claimed that he removed the sculptures partly in order to rescue them from the ongoing destruction of weather, tourists, and the inhabitants of Athens. Elgin also claimed to have been granted the right to remove them by the ruler of the Ottoman empire, which had been occupying Greece for a few hundred years.

There’s some dispute as to whether he took these items legally. Several years later, when Elgin was experiencing financial difficulties, he sold the sculptures to the British government, which placed them at the British Museum, where they’ve remained ever since.

Meanwhile, Greece, which gained its independence in 1832, has for more than a century called for the sculptures to be returned. The Acropolis Museum now has approximately half of the remaining Parthenon sculptures displayed, within sight of the Parthenon itself.

Monessa Cummins, associate professor of classics, teaches Greek art and architecture. She’s taught about the ethical issues surrounding ownership of classical antiquities as part of other courses and knows that students are fascinated by these issues. However, she didn’t know much about the history of museums and their ethics. So she invited Lesley Wright, director of the Grinnell College Museum of Art, to bring her expertise in museum history, 19th-century cultural history, and the Parthenon sculptures as a museum studies case study.

“Having both of these very experienced and intelligent individuals teaching the thing that they are most experienced in and getting both sides of those topics was something I hadn't had before at Grinnell,” says Zachary Susag ’19, a computer science and mathematics double major from Minnesota. It made the learning environment even more effective.

Maverick Zhang ’20 appreciated that the professors were learning from each other. “While one professor taught, the other sat like a student,” says Zhang, a classics and biological chemistry double major from China. “We can learn knowledge together with a professor.”

Cummins and Wright thought it was essential to include a travel component in the course. That way students could experience and analyze the Parthenon sculptures held by the British Museum in London and those held by and displayed at the Acropolis Museum in Athens. Having that dual experience of seeing the artwork in two different contexts would underscore the complexity of the ongoing controversy.

Hearing the insider’s perspective of Ian Jenkins, senior curator with the British Museum’s Department of Greece and Rome, was incredibly valuable, says Damaris Marquez Membreno ’21, a psychology major from Maryland. Visiting the British Museum and the Acropolis Museum during the same trip “helps us understand the context of the Parthenon itself and the sculptures,” she says.

Another benefit to the course-embedded travel was “understanding the kind of visitors that are in the British Museum and the Acropolis Museum,” Marquez Membreno says. This cultural awareness was especially useful later in the semester when students prepared to debate the issue of who should own the Parthenon sculptures.

The travel also furthered students’ cultural respect through casual conversations with local people. Zhang discussed the issue with a receptionist at the group’s London hotel. “She was born in Greece,” Zhang says. “She felt really strongly about the marbles, even though she grew up in London. I had a sense of how complicated these things can be.”

Persuading People to Change Their Minds About a Thorny Issue

Before the debate began, a preliminary vote was held to see what the audience members’ views were. Of about 45 people, 34 thought the artwork should be returned to Greece.

In the 45-minute debate, students articulately communicated the complexity and nuances of the issue.  They were so persuasive that several members of the audience changed their votes.

“I don’t think any of us expected it to go as well as it did,” says Susag, who was on the British Museum’s side. “We were able to convert 30% of Grinnellians over to the British Museum side, which was great. We made it about equal, which is what we were going for.”

For Susag, the double science major, this course was a way for him to immerse himself in a subject he enjoyed. “I view this class as a foundational class in my liberal arts experience at Grinnell.”