Wisdom of the Ages 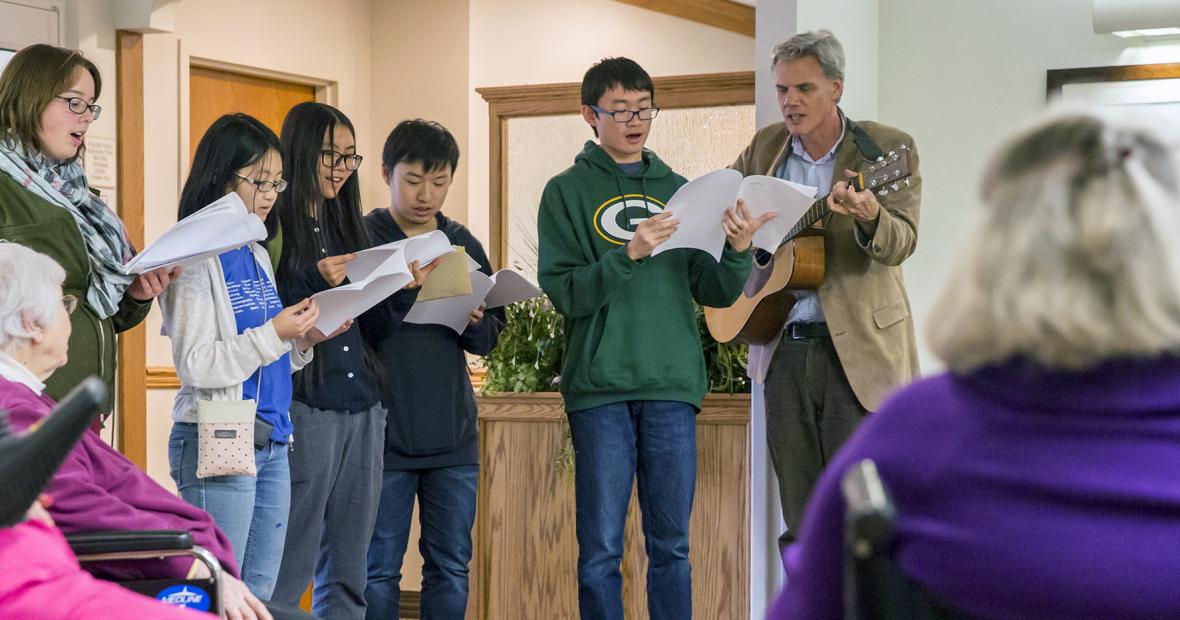 For a retirement community, the Mayflower has had a lot of people under 25 milling around lately. On any given afternoon, you’re likely to find Grinnell students conducting research for class, caroling through the halls, or playing a game of ping pong with an elderly friend.

Along with St. Francis Manor and Seeland Park, the Mayflower has long been a popular spot for students to volunteer and engage with local seniors. But recently bonds between the College and the Mayflower have grown in strength and scope. Initiatives span the spectrum from psychological research to musical entertainment and a program that facilitates friendships across generations — to name a few.

The partnership between the Mayflower and the College is just one example of how community engagement enriches both the College and the town of Grinnell. When academic, extracurricular, and interpersonal connections between local institutions thrive, everyone benefits.

A Rich Site of Inquiry for Psychology Students

It may seem ironic, but adult development is a “very, very young field in psychology,” says Ann Ellis, professor of psychology. “It wasn’t until the late ’80s that we started seeing empirical research on how adults change over time with regards to cognition, personality, and other psychological factors.”

In response to the field’s growth within the psychological community, Ellis created a course in adult development. “We look at changes in thought processes, personality, relationships, and responses to life transitions,” she says.

As part of the fall 2015 course, students interviewed Mayflower residents about their lives. After surveying the literature and developing research questions, students queried residents about how their goals, relationships, challenges, and joys had changed over time.

Residents reported that as they aged, their goals became less lofty, and more realistic. They struggled with physical, cognitive, relational, and career losses, but found joy in the freedoms of retirement. Many took pleasure in seeing their children and grandchildren strive and thrive.

Through the project, Ellis’s students deepened their understanding of course content in a real-world context. They gained firsthand experience designing a study and collecting and analyzing non-laboratory data. In the process, they broke down some of their own ageist stereotypes.

“Seniors are the target of a lot of fear and negative stereotypes,” Ellis says. “But my students learned that the residents at the Mayflower are an amazingly diverse and interesting group of people. They have incredible stories to tell.”

In the spring of 2016, Katherine Tucker ’16 set out to create a program that would facilitate student-resident connections on a longer-term basis.

The project grew out of a semester-long internship at the Mayflower, which Tucker completed as part of a practicum course with Susan Ferguson, professor of sociology. After spending several weeks in the memory care unit, Tucker realized that “there was so much need for more one-on-one interaction. Many residents do not have regular visitors and are chronically lonely.

“It’s also a public health issue. Loneliness and a lack of meaningful relationships can lead to increased rates of depression, memory loss, and a host of negative consequences for health,” she says.

Today, Adopt-a-Grandparent’s 23 student-resident pairs are flourishing. Students are required to make a biweekly commitment to visiting their “adopted grands,” but they are free to spend that time however they choose. Some students bring instruments and bond over music. Others go on bike rides or share a cup of coffee with their resident. Above all, they listen and learn.

“So far, interacting with my adopted grand has been nothing short of a blessing,” says Brandon DeBella ’19, who joined the program last fall. “He has so much to share with me about his life and his way of seeing the world, and he is eager to hear all about my life as a student and a young adult in a context that is so different from his own when he was my age.

“I feel as though we as a society do not turn to our elders for advice and friendship, and that is something I am committed to doing and modeling for my fellow students,” DeBella says.

Nelson agrees. “Our seniors have so much to share, and nobody to listen,” she says. “But when they connect with young people, and hear about their hopes and dreams, they feel young again.

“Knowing that College students care makes our residents feel valued and vital. And students —  especially those whose grandparents have passed or live far away — get to experience a cross-generational friendship that they otherwise might not have,” she says.

One of the most exciting frontiers in Alzheimer’s and dementia research is the discovery of the impact that music has on the aging brain. Documentaries like Alive Inside chronicle the myriad ways that music benefits seniors with dementia: it evokes emotions that trigger memories, fosters emotional closeness, and can help shift mood, manage stress, and stimulate positive interaction.

John Christian Rommereim, Blanche Johnson professor of music, and the Grinnell Singers are bringing those findings to life for Mayflower residents. In fall 2016, Rommereim and the Singers began hosting pop-up concerts around the facility. Their entire repertoire is resident-requested, and during the informal concerts, residents often stand up and sing along.

Meanwhile, Adopt-a-Grandparent students have been programming iPod shuffles for residents in the health center and memory care units. With input from Nelson and residents’ families, students create personalized playlists designed to evoke positive feelings and nostalgic memories. The iPods are donated by the Mayflower Residents Association.

“Our residents are thrilled with the iPods,” says Nelson, “and they are excited about all of the opportunities to interact with college students, musically and otherwise.

“Intergenerational connections are enriching to all. It’s truly a win-win situation.”

Learn more about opportunities to get involved with the Service and Social Innovation Program as a student. Additional resources for students and non-students alike can be found through the Office of Community Enhancement and Engagement.