In the wake of the Dobbs decision, which overturned Roe v. Wade, 69% of Americans believe the option of having an abortion before the 15th week of pregnancy should be a guaranteed right, according to the newest edition of the Grinnell College National Poll. The results of the poll, conducted Sept. 20 - 25, 2022, by Selzer & Company in partnership with Grinnell College, were released on Wednesday, Sept. 28, 2022.

Nearly half (49%) of Republicans share this belief, along with 89% of Democrats and 69% of independents. Additionally, 50% of those identifying as Evangelicals support abortion as a right.

“Earlier this year, the U.S. Supreme Court ruled that abortion is not a protected right, and that elected officials should decide whether it should be allowed,” said Peter Hanson, director of the Grinnell College National Poll. “We find that Americans overwhelmingly reject the court’s view.”

The Dobbs decision ignited a discussion about other issues, including Americans’ right to use contraception and to marry someone of the same sex. Solid majorities across both parties agree that using contraception (80% of Republicans and 96% of Democrats) and marrying someone of the same sex (56% of Republicans and 89% of Democrats) are rights that should be guaranteed to all citizens. Agreement with a guaranteed right to openly carry a firearm in public splits largely on party lines. 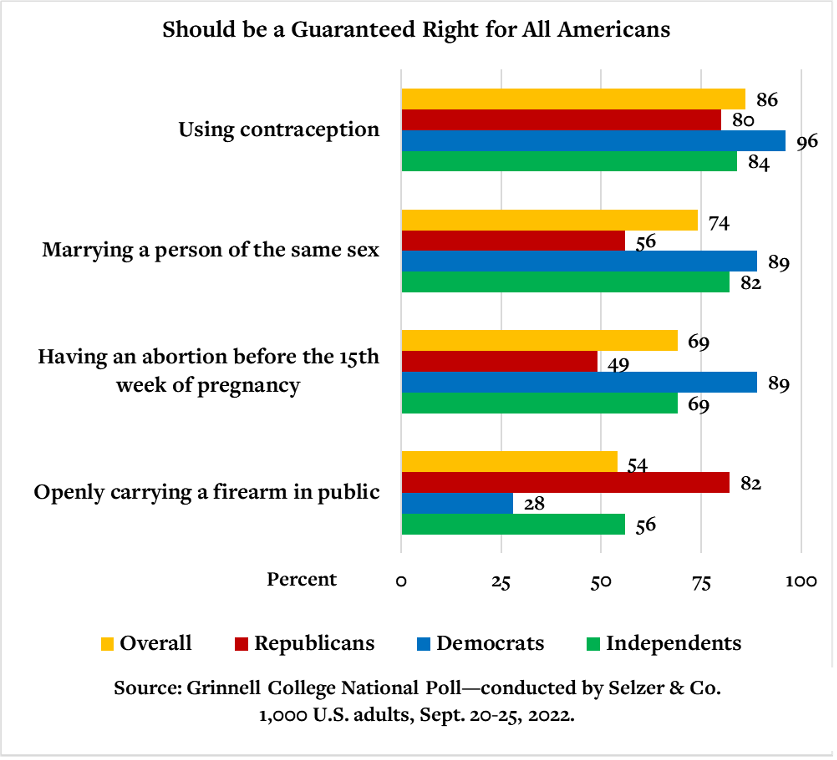 Less than Half of Republicans Identify with MAGA

“It was interesting to see that less than half of self-identifying Republicans describe themselves as MAGA Republicans,” said J. Ann Selzer of Selzer & Company. “The demographics align with conventional wisdom on core Trump supporters. What I had not anticipated is that almost half of MAGA Republicans live in the South (46%, compared to 35% of non-MAGA Republicans).” 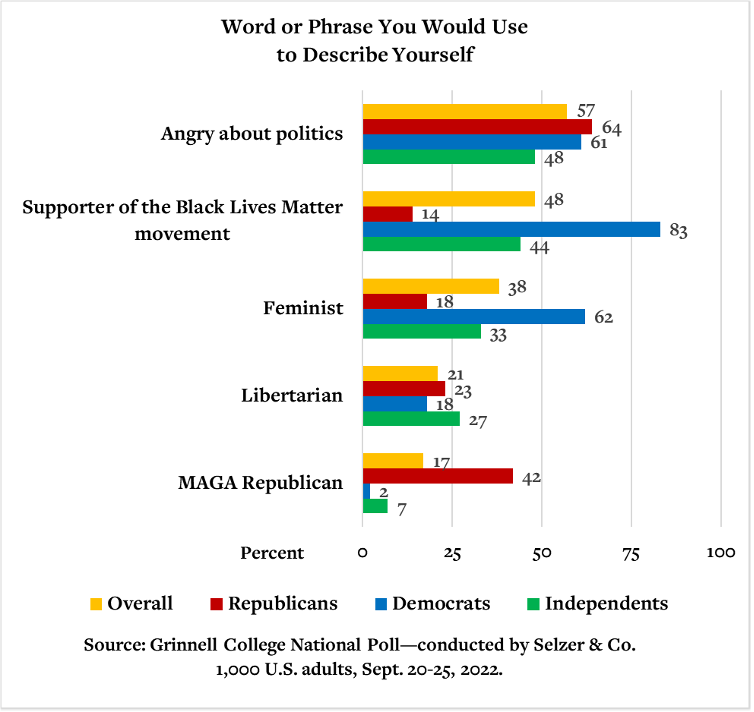 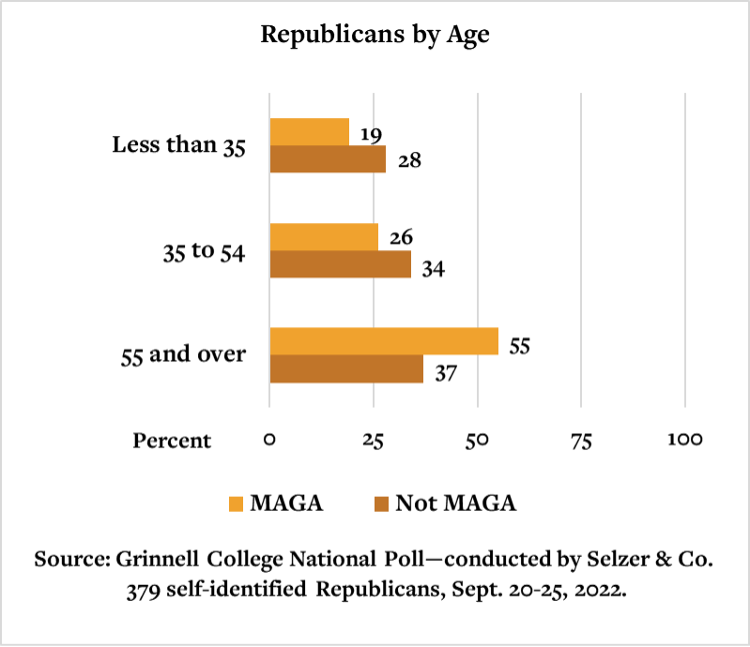 Nearly half of all Americans (48%) describe themselves as being a supporter of the Black Lives Matter movement. However, there is a wide split along party lines, with 83% of Democrats and only 14% of Republicans supporting the cause.

Nearly equal proportions of members of each party are angry about politics, according to the poll. At 57%, it ranked highest of all words and phrases presented. When asked if that phrase described them, 64% of Republicans and 61% of Democrats agreed that it did.

“With Democrats in control of Congress and the presidency, you might expect more Republicans than Democrats to say they are angry about politics, but we found no meaningful difference between the two parties,” Hanson said. “Anger is a powerful motivation to vote, and this is another sign that we’re not facing a typical midterm election in which the political winds favor the party out of power.”

Other poll findings include:

Interestingly, those reporting a lower household income ($50,000 or less) are more likely to say all deserve the same.

“In this question, we were interested in how Americans think about fairness,” said Karla Erickson, professor of sociology at Grinnell College. “Equity is the idea that we should provide extra help to those who need it to create opportunity, while equality suggests we should treat everyone the exact same way. We find that both ideas resonate with Americans, with a slight majority saying those who are disadvantaged deserve extra assistance.”

For more information on this or previous editions of the Grinnell College National Poll, visit www.grinnell.edu/poll.