One class can lead to a career that matters. 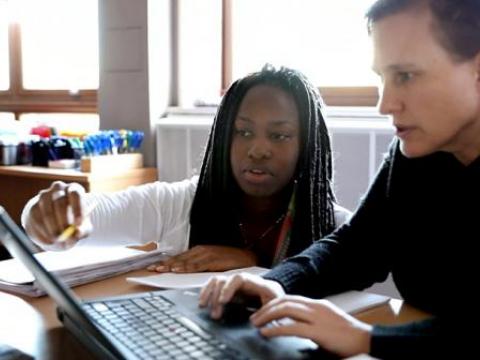 “My whole life I said to myself, ‘I will not teach,’” says Kaydi-Ann Newsome ’14, an economics major from Jamaica. “I remember my chemistry teacher in year nine saying to me, ‘You know, one day you’re going to be a teacher.’ I was just like, ‘No, sir. It’s not going to happen. It’s just not going to happen.’”

But in her second year at Grinnell, Newsome took Comparative and International Education with Deborah Michaels, associate professor of education. “That’s when I realized I’ve been thinking all wrong,” Newsome says. “I love education. I want to be a part of this whole movement and get into studying education a lot deeper.”

She dove into a summer research project with Michaels, studying the Teach for All movement. At the time Newsome was doing her Mentored Advanced Project, Teach for All had just started programs, or was looking to start programs, in several countries in Latin America and the Caribbean, including Jamaica.

“That was the point where everything started to come together,” she says. Her economics background in social development, her global development studies concentration, “and then of course, this education as the tool that’s supposed to lift you all out of this.”

Yet teaching was still not on her radar. Three weeks after she graduated from Grinnell in 2014, Newsome moved to London where she knew she had the support of her extended family. Because her dad was born in Britain, Newsome has dual citizenship, so she was able to start looking for work right away.

She found a job tutoring in math and English for a private company. On her first day she recalls thinking, “Man, this feels so natural.”

A colleague at her new workplace suggested she apply for Teach First, the U.K.’s sister organization to Teach for America. Newsome did “loads and loads of research” on the organization, which only accepts applications once a year.

She landed the job, and in June 2015 she started six weeks of summer training with the organization. She learned about the pedagogy of teaching math and how to manage herself and students. “It was just intense,” she says.

During her first year of teaching, Newsome was, herself, a full-time student. “Every six weeks, I was either writing a research paper or writing a paper based on a class that I had taught,” she says.

In addition, she was doing all the things a teacher regularly does. “Assessments don’t mark themselves. Lessons don’t plan themselves. Assignments don’t write themselves. Things like following up with parents at the end of the day, that definitely doesn’t do itself either.”

In fall 2018, she started a master’s program in education planning, economics, and international education while continuing to teach at Trinity, both part time. “I have been challenged to steer my career in a direction that can tie my experiences from growing up in Kingston, Jamaica, my Grinnell years, and my own lessons from teaching in London to broaden my impact in the field of education.”