Embracing the Challenges of Independent Travel 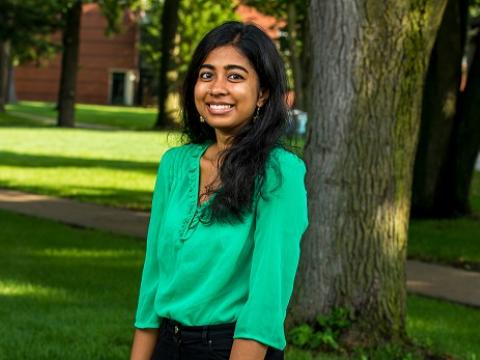 Grinnell was really the first place where I actually had the chance, or the self-awareness, to pursue something that was a little bit out of my comfort zone.

Mithila Iyer ’19 has come a long way since her first year at Grinnell. In fact, she came a long way just to get to Grinnell. Iyer is from India, and before that her family moved from Pakistan during the time of partition. Travel seems to be in her genes, and she has developed a keen awareness of movement, home, and identity during her time at Grinnell.

Recently, she put those themes into action, traveling across the country to observe and interact with minority theatre productions. Iyer won the Fischlowitz Travel Fellowship, which provides $5,000 to the winning student for travel during the summer or breaks during the school year. The fellowship is geared toward international students who haven’t had the resources to travel extensively in the United States. By providing students with the opportunity to pursue purposeful independent travel, the fellowship encourages recipients to combine their academic and personal interests beyond Grinnell’s campus. 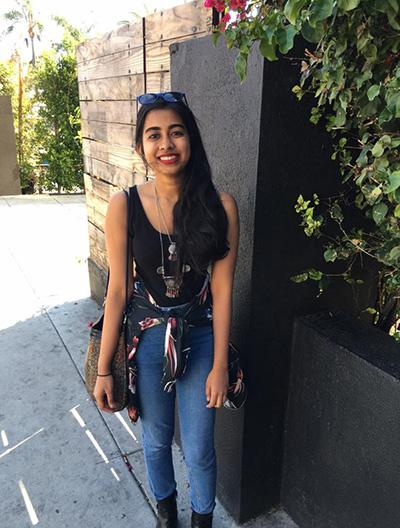 Beginning her first semester, Iyer seized the opportunities of Grinnell as she explored new interests, pursuing an inkling that she might like to try theatre.

She “had always been interested in theatre, film, and TV,” she says, but only as a consumer. At Grinnell, she took the next step — getting involved herself. “Grinnell was really the first place where I actually had the chance, or the self-awareness, to pursue something that was a little bit out of my comfort zone,” she says.

Iyer auditioned for all 3 mainstage theatre productions her first year but didn’t get a single callback. Undeterred, she enrolled in an Intro to Acting class in the spring semester. “I knew that this was something I wanted to keep doing no matter how difficult it was initially,” she says. Her perseverance paid off, as she landed a spot in a student production the following semester. Now a senior, Iyer has found her stride as a member of the theatre community in Grinnell.

A French and economics double major, Iyer developed an interest in the study of human rights through her Economic Development class with Tamara McGavock, assistant professor of economics. Combining her passion for theatre with her interest in human rights, Iyer began to see freedom of expression and theatre representation as a natural extension of human rights. “Whether it’s concerning migration or seeking asylum or something as diverse as artistic expression,” she understands them as part of a larger umbrella of important human rights issues.

Her seemingly disparate interests in theatre and human rights coalesced in her application for the Fischlowitz fellowship. After applying for the fellowship unsuccessfully in her first two years, Iyer learned from the process of applying and clarifying her interests, putting together a winning application her third year.

Through the fellowship, Iyer traveled to five major U.S. cities between spring and fall of 2018 to investigate minority representation in theatre productions: New York City; Los Angeles; Washington, D.C.; Fort Worth, Texas; and San Francisco. In each city, Iyer saw plays that highlighted different minority groups. She also interacted with cast, directors, and fans of the shows.

She also plans to visit Golden Thread Productions in San Francisco this spring to finish up her fellowship travels.

Visiting these theatres and seeing their productions, Iyer sought to understand why these theatre companies felt the need to create art performances that spoke to themes and experiences of particular minority groups. She discovered that a lot of the plays had pretty relatable, universal themes. For example, Bingo Hall showcased “a teenager pressured to choose between different kinds of colleges and leaving home for the first time,” she says, something which resonates with her quite strongly.

Beyond the value gained from researching connections between human rights and theatre, one of the most important takeaways from the fellowship for Iyer has been personal growth in the form of self-reliance and independence. Before this fellowship, she had not traveled alone except for coming to and from Grinnell. So, taking a $5,000 budget and planning and executing an itinerary with almost total freedom presented a challenge, but also an opportunity. Iyer learned to grapple with her newfound agency and thrive in places where she previously might have been hesitant or uncomfortable.

“It really taught me that I can take on whatever I choose ... and sometimes more than I thought was possible,” she says.

To hear an extended interview with Mithila, check out Episode 1 of the podcast All Things Grinnell.