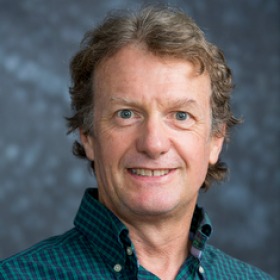 Bill Ferguson, Gertrude B. Austin Professor of economics, received a B.A. (in History) from Grinnell College and an Economics Ph.D. from the University of Massachusetts. In 1976, he moved to Seattle, Washington where he worked for six years as a neighborhood community organizer on neighborhood and utility issues. After teaching as a visiting assistant professor at Williams College, he returned to Grinnell as an assistant professor of economics in the fall of 1989. He was promoted to associate professor in 1995 and to the rank of full professor in 2005.

His recent book, Collective Action and Exchange: A Game Theoretic Approach to Contemporary Political Economy was published by Stanford University Press in July, 2013 (https://www.sup.org/books/title/?id=18537). The book applies cutting-edge of economic theory and game-theoretic modeling to argue that economic development requires prior resolution of collective-action problems—problems that arise when the pursuit of individual interests generates undesirable economic or political outcomes for society at large. Examples include pollution, crime, excessive inequality, the persistence of various forms of race or gender discrimination, financial instability, and regional economic stagnation.

Related publications on updating the economics curriculum and implicit bargaining power in employment relationships appear in the Journal of Economic Education, the Journal of Institutional and Theoretical Economics, and the Eastern Economic Journal anda game-theoretic analysis of the influence of social context and the transmission of the HIV virus (a joint paper with Trang Kieu Nguyen. Related working papers include “Collective Action, Inequality, and Development: Prelude to a Comprehensive Theoretical Framework,” and “Facing Uncertainty: the Role of Norms and Formal Institutions as Shared Mental Models.” Other working papers address game theory as an analytical foundation for social scientific inquiry; the political economy of collective-action, radical reform, and revolution. He is currently in the early stages for a second book on collective action,  inequality,  and development.

Professor Ferguson's teaching has ranged from institutional political economy, policy analysis, and game theory to labor economics, British economic policy (taught in London), statistics, and macroeconomic analysis. He was an early director and chair of the Grinnell-in-Washington program, for which he developed much of the curriculum. He has served as chair of the Policy Studies Concentration, which he helped to develop based on his work with Grinnell-in-Washington. He has twice been chair of the Social Studies Division at Grinnell and a member of the Faculty Executive Council and recently chaired the Economics Department. Courses taught 2012-2015 include Seminar in Political Economy (ECN 370), Applied Game Theory (ECN 338), Foundations of Policy Analysis (ECN/PST 220), Labor Economics (ECN 215), Introduction to Economics (ECN 111), and London as a Global Economic Centre Before and After the Financial Crisis.

Interview with Pablo Yanguas, of the Global Development Institute, University of Manchester

Introduction to forthcoming book, The Political Economy of Collective Action, Inequality, and Development