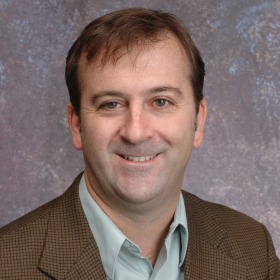 Daniel Reynolds has taught in the German studies department at Grinnell College since 1998. His recent book, Postcards from Auschwitz (NYU Press, 2018), explores the relationship between tourism and Holocaust remembrance, a topic he has been researching since 2007. His book looks at the ways museums and memorials to the Shoah have evolved over the past 75 years in Poland, Germany, Israel, and the United States, and how modern tourism brings its own challenges, but also opportunities, to Holocaust remembrance.

His other research interests include German literature and culture from the late 19th century to the present, with special emphasis on the Weimar Republic, East Germany, the history and culture of Berlin, and German colonialism and the genocide of the Nama and Herero people in today's Namibia, a former German colony. For a full list of his articles and presentations, see his CV (below).

At Grinnell, Reynolds has been an early leader in developing course-embedded travel opportunities for students. Since 2010 he has been taking students to Europe as part of his team-taught class on the city of Berlin with Professor Jenny Anger in Art History, and more recently with Professor David Harrison in the Department of French and Arabic as part of the Global Learning Program.

Reynolds went to Georgetown University and earned his Bachelors degree in International Economics in 1986, and later went on to earn his PhD in Germanic Languages and Literatures from Harvard University in 1996. He wrote his dissertation on the phenomenon of metafiction in German-language literature during the 20th Century, focusing on the prose works of Rainer Maria Rilke, Hermann Broch, and Günter Grass.

Commentary: Should We Really Be Surprised to Hear About Sexual Harassment on Capitol Hill?

Will gun violence lead to a growing 'dark tourism' industry?