On many early mornings in Namibia’s dry Namib Sand Sea, the air is quiet, cool, and smells of water. Grinnell College Biology Professor Kathy Jacobson says that from atop a sand dune: “You can look down on the sea of fog and see the other tops of the dunes sticking out… It’s this really mystical experience.” Then, the sun rises, and “you get this wonderful visual sensation as the sunlight burns off the fog, warming and brightening the surroundings.”

The fog, which rolls in from the Atlantic Ocean and is predicted to decrease with climate change, is “such an incredible thing because you know that [it] is life-giving moisture for everything that lives there,” Jacobson says. She has been studying fungi in the Namib Sand Sea for 30 years, but her recent work focuses on fungi that are given life by the fog. One of her research projects focuses on such fungi that live in the perennial bunchgrass Stipagrostis sabulicola, a golden grass that grows in clusters up to 20 feet wide and 6 feet tall. The bunchgrass is key to the ecosystem — it stabilizes the sand, and many organisms call its clusters home.

Jacobson and her fellow researchers — Anthony Wenndt ’15, who was a student at the College when he began the research; Sarah Evans ’05, a professor in the Department of Integrative Biology at Michigan State University; Robert Logan ’13, a graduate student in Evans’ lab; and Jacobson’s husband, Grinnell College Biology Professor Peter Jacobson — co-authored a paper published in Frontiers in Microbiology that asks why the bunchgrass harbors complex communities of endophytes, fungi that live inside plants.

Endophytes do not harm the plants in which they live, but they do use resources the plant would otherwise use. Given the water stress the bunchgrass experiences in the Namib Sand Sea, Jacobson’s team wanted to know, “Why the heck would a plant that’s living in this stressful environment support this complex fungal community all the time?” Knowing this is interesting in and of itself, but it also advances the understanding of why any plant does or does not have complex communities of endophytes.

The team hypothesized that the bunchgrass, which can live for more than 50 years, harbors complex communities of endophytes so that when stems die, those endophytes can function as saprophytes, fungi that decompose dead material, to immediately decompose the dead stems. However, there was not “any direct evidence that a saprophyte that’s actually living in a stem is going to become the saprophyte that decomposes it.” Rather, the saprophytes that decompose stems could be transported to the plant through the air after the stem dies. Their research sought to find if the evidence existed that the fungi in a living stem decompose the stem after it dies.

Clusters of the bunchgrass teem with life. In and around them, there are beetles, scorpions, snakes, and more. Most of all, Jacobson has to beware of the ants. “You come in there to do any work, and they’ll come running out to try and bite you and intimidate you,” she explains. On the whole, “You have to be careful sampling in there.”

On trips to Namibia in 2015 and 2016, the Jacobsons, Evans, and Logan got past the ants and collected samples of healthy living and dead stems. They stored the samples on icepacks to prevent decomposition and carried them back to the United States to study.

The team collected these samples in two regions of the Namib Sand Sea that receive moisture from different sources (rain and fog). They wanted to know if there was a threshold at which the plants became so water-stressed that they prevented endophytes from living inside them, as Jacobson found was the case with other plant-fungal symbiotic relationships. But she found no such threshold in this case ­­— the number of endophytes was similar in both regions. So, despite the resource costs, “The plant is saying, ‘Oh yeah, we want the endophytes present. We need these guys.’ The question was ‘why?’”

Back at the College, Wenndt placed pieces of the stems the team had collected onto plates. As the endophytes grew from the stems onto the plates, he extracted those with distinct appearances. These endophytes were likely distinct species, and Anne van Diepeningen, a colleague in the Netherlands, genetically sequenced them to identify what species they were. In the lab, Wenndt tested if those endophytes could decompose dead stems and found that 80% could. Before this, fungal biologists did not have evidence that endophytes could decompose the plants in which they lived.

Then, Evans and Logan used genetic sequencing to compare the fungi that were in the living and dead stems to estimate how many endophytes actively decomposed dead stems. 59–70% did, and 60% were still actively decomposing the stems a year after they died.

Discovery Near and Far

All the evidence added up to the discovery that the bunchgrass does have complex communities of endophytes so that when stems die, those endophytes can immediately decompose the dead stems if moisture is available, such as when there is fog. The reason immediate decomposition is so important to the bunchgrass has a lot to do with its environment. 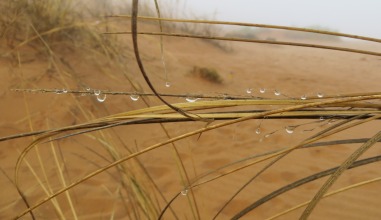 Clusters of bunchgrass are “nutrient islands in a sea of lifeless sand,” Jacobson explains. Nutrients such as nitrogen and phosphorus are limited in the dunes, but they are essential for the bunchgrass growth. Quickly recycling nutrients from a stem after it dies helps the whole plant survive (a few stems, not the whole plant, die each year). This symbiotic relationship with fungi is “yet another wonderful evolutionary adaptation of these plants that allows them to survive in this harsh desert environment,” she says.

She thinks other perennial bunchgrasses with nutrient limitations may share this evolutionary adaptation. Perennial bunchgrasses experiencing high competition from other plants, such as big bluestem in Iowa, may also have complex communities of endophytes to accelerate nutrient recycling and outcompete other plants. Jacobson’s future research will seek to find this out, with the help of current and future students.

Mentored Advanced Projects (MAPs) are research or creative projects carried out in collaboration with a faculty member. Nearly 40% of students complete a MAP at the College. “A MAP provides an opportunity to be immersed in the process of scientific discovery, and the culture of doing science with peers and mentors. Regardless of whether students decide to pursue a career that involves research, the independence provided by a MAP experience is an opportunity for immense intellectual and personal growth for students,” says Jacobson. In addition to the invaluable knowledge and skills that students develop, some MAPs, such as Anthony Wenndt’s, lead to published work in academic journals.

A Fragile, Fog-Dependent Web of Life

Without the fog, fungi that decompose dead stems could not survive in the Namib Sand Sea. If the fog does decrease with climate change, those fungi will not be able to recycle nutrients as well. That, in turn, would hurt the bunchgrass and all the organisms that call it home. “If we ended up in a situation where we had less dew and fog, it would mean that this whole food web could come apart,” Jacobson says.

For now, though, the fog continues to roll in and give life to the fungi. And the fungi continue to support the plants, the angry ants, and the curious scientists.