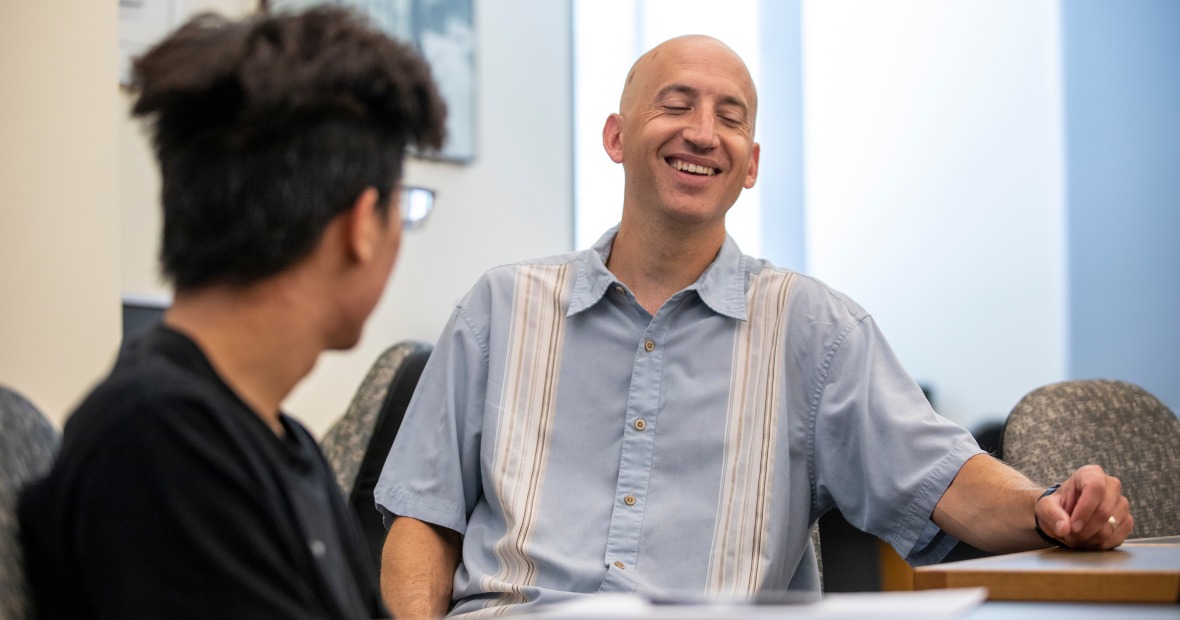 In a paper recently accepted by Mathematics Magazine, faculty members Jeff Blanchard and Marc Chamberland share a story of Grinnellian resilience and intellectual curiosity applied to solve a daunting problem.

In the spring of 2020 during the emerging COVID-19 pandemic, Grinnell College and higher education institutions across the country raced to adapt to remote learning and teaching. In a matter of days, friendships spanned thousands of miles, and three-minute walks to class in the Noyce Science Center became three-second logons to Webex lectures.

Led by public health guidance and the need for flexibility, the College elected to split the upcoming fall semester into two quarters: instead of taking four courses at a time, students would take a pair of classes for each of two seven-and-a-half-week terms. The decision would allow small populations of students to return to campus, but it also required a complete overhaul of the planned course schedule.

Students, faculty, and staff had already gone through the registration process for over 4,500 seats in 358 fall courses. Course rosters were carefully balanced for a standard semester. Would all this communal work be scrapped, and registration started from scratch, faculty and staff wondered, or could the new schedule be derived from the completed registration?

Where most saw a logistical nightmare, Professor of Mathematics Marc Chamberland saw a math problem.

Shortly after the semester split was announced, Chamberland called Associate Professor of Mathematics Jeffrey Blanchard. “I have an idea,” he told Blanchard. “Can we meet?”

Both Blanchard and Chamberland are applied mathematicians. They use mathematical methods and theories to solve real-life problems. So when the two met in Blanchard’s backyard, seated 10 feet apart on folding lawn chairs, Chamberland reframed the registration crisis as an optimization problem — a mathematical problem that seeks to find the best solution out of many feasible outcomes. Tackling this task as a math problem, Chamberland believed, would allow the College to preserve far more of the completed registration than divvying up the courses by hand could.

Blanchard and Chamberland went to work to develop an algorithm that would rapidly sort the fall courses into two terms so that the fewest students would lose their seats in classes they’d already registered for. The algorithm, Blanchard explains, approached the problem just like a human would — it drew a random class, one at a time, and placed that class in the term where it created the fewest problems. Unlike humans, however, this coded algorithm could repeat the entire sorting process hundreds of times in just a few seconds. It could also operate unburdened by emotions (read: frustration).

With their algorithm methodically working through every possible arrangement of courses, Blanchard and Chamberland soon identified schedules that preserved at least 85% of the already-registered seats. When shared with the administration, these initial findings met with overwhelming relief. “People had hoped for a solution that preserved maybe half of the existing registration,” Blanchard remembers. “No one had dared to dream of one that left 85% of registration intact.”

Backed by administration and the registrar, Blanchard and Chamberland reformulated their task — this time, the optimization problem penalized the potential arrangements of classes not only for the number of student seats that were lost, but also for breaches of course size and faculty course load restrictions. With the registrar, they settled on a schedule that preserved 90% of registered seats and minimized faculty conflicts. Having successfully split the courses into two terms, the mathematicians solved one final problem and assigned each class to a meeting time slot.

Two years later, Blanchard, Chamberland, and the Office of the Registrar agree that their use of applied mathematics to minimize disruption to students helped Grinnellians persevere during an otherwise turbulent time. During the first year of the pandemic, Grinnell saw fewer students leave the College or take a leave of absence than its peer institutions did. Amidst a college experience drastically different than the one they’d anticipated, Grinnellians’ academic plans remained largely intact.