Because They’ve Been in Your Shoes 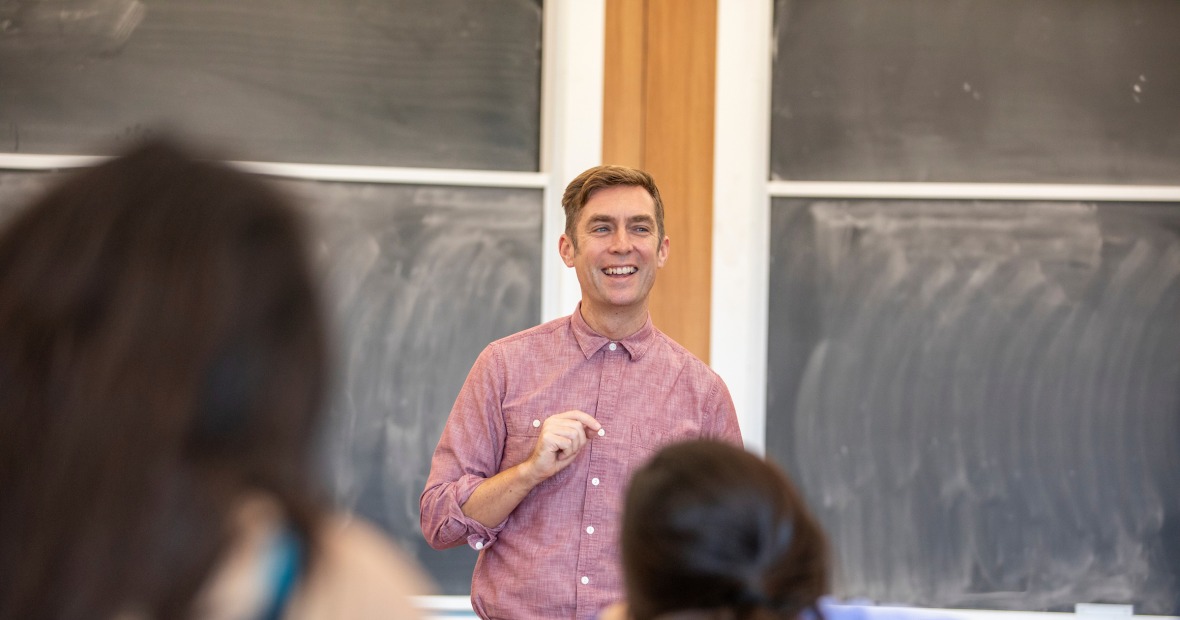 Faculty are not only mentors and advisers — they’re role models for how to navigate classes, careers, and life.

When you’re sitting in your professors’ offices, surrounded by the accoutrements of their professional accomplishments, it can be hard to imagine that they were ever in your shoes. Did they wonder what to study? What career interests to pursue? Whether to go to grad school? How to contribute to the common good?

Tim Dobe, professor of religious studies, remembers exactly what that’s like. “I relate to their stress and anxiety,” he says about the students in his senior seminar.

As an undergrad at the University of New Hampshire, Dobe majored in English and studio art. One day his mentor sat him down and said, “You know, you write all your English papers about Christ imagery, so maybe you should go to seminary. Have you thought about that?”

Dobe hadn’t thought about that, but he decided to add it to his list of options. “I applied to five different things, like MFAs in poetry, in painting, and medieval literature Ph.D.s; and seminary was one of those things,” he says.

He decided to attend Princeton Theological Seminary. “It wasn't any kind of angelic vision or anything that led me there,” Dobe says. “It was pretty pragmatic. I grew up in a certain Christianity that I was questioning, and I wanted a more intellectually engaged experience studying the tradition and religion generally. That's what I got there.”

Dobe also explored the possibility of ministry. “I pretty quickly learned that it wasn't for me, but the intellectual part of seminary was really great.”

His professor for courses on Hinduism and Buddhism encouraged him to pursue further graduate education in comparative religion.

Before doing that, Dobe took a break. He and his wife Jennifer Kirchmyer Dobe, assistant professor of philosophy, had become interested in teaching abroad, so after Dobe completed his master’s in divinity in church history, the couple taught for 2 years in an international school in Tanzania.

They returned to the United States and got back on the academic track. Dobe pursued his interests in South Asian studies at the University of Pennsylvania and earned a doctor of theology from Harvard Divinity School. Along the way to his doctorate, he accepted a position at Grinnell in the religious studies department.

He’s taught courses on religious traditions of India, mystics and politics of Islam, global Christianities, and Martin Luther King Jr. and Gandhi, among others.

It was Dobe’s work on Gandhi that led him in another interesting direction with his teaching. It “grew more and more in an activist direction,” he says. “If [you’re] reading Gandhi, it’s clear it’s about civil disobedience … not just nonviolence.”

Nonviolence is messier than the popular images convey, Dobe says. “Gandhi was more like a general of a nonviolent army — the core of which was the ability to disobey the ruler.”

That insight about the ability to disobey made him think “we’re not teaching enough of that,” he says. Grinnell teaches students to discuss and to critique, “but when do you disobey?”

Dobe points to the American transcendentalist Henry David Thoreau, who published an essay on civil disobedience in 1849. “Thoreau says, ‘The place for a just man in an unjust society is in jail,’” Dobe explains. “This is very much an American tradition.”

Gandhi read Thoreau’s essay, and it informed his work in India. Dobe has long been interested in Gandhi’s history and in South Asia — both interests that led him into teaching activism.

This work attracted the attention of faculty and staff in the Peace and Conflict Studies Program. He was invited to participate in meetings and helps teach the introductory course for the concentration.

“One of the nice things about Grinnell as a small liberal arts place … [is that] as a faculty member, you’re encouraged to, and free to, change,” Dobe says.

If Tim Dobe sounds like the kind of professor you’d like to take classes from, do research with, or grab a coffee with, you may want to “meet” some of Grinnell’s other faculty through their videos, including Henry Rietz ’89, professor of religious studies.