The Cultural Power of Food

Summer research connects food and community in the Global Kitchen 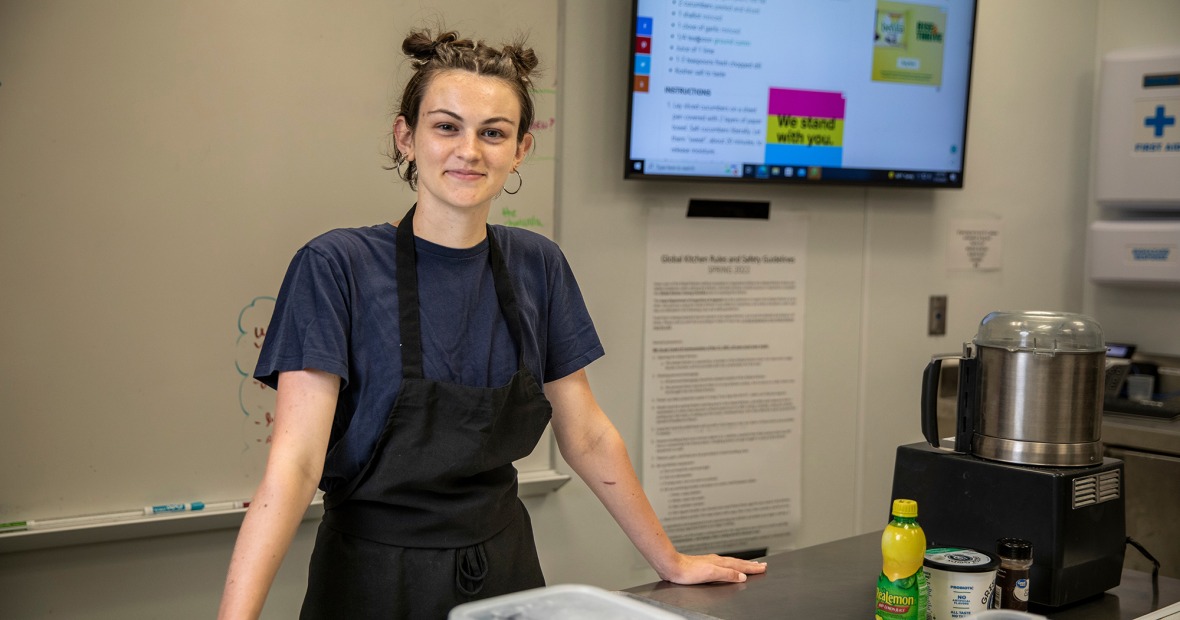 Food connects us all in a very visceral, human way — after all, everyone eats. This summer, one Grinnell student is conducting a research project to study how we can use this common bond to create connections on campus and beyond.

This morning, Leahy pulls chilled pastry dough out of the Global Kitchen’s gleaming new refrigerator and prepares to roll it out. She’s making quiche to be delivered to the emergency food pantry operated by Mid-Iowa Community Action (MICA) in Grinnell.

Leahy swiftly chops up some Swiss chard and scallions from the Grinnell College Garden to toss in the quiche. Local produce from one of the community gardens, or occasionally gathered on a foraging expedition, is an important part of the project, but Leahy concedes that it can be hard to know exactly what to do with something like Swiss chard.

Honestly, I feel really privileged to get to do this as my MAP. This is definitely my version of fun.

“I'm cooking a quiche with that, so hopefully, it’s a little more appealing and it’s a little easier for people to use,” Leahy says. The staff at MICA report that her donations usually disappear quickly. “That makes me very happy,” Leahy says.

In the Global Kitchen

With her MAP adviser, Professor of Russian Todd Armstrong, Leahy is exploring how Grinnellians can use the Global Kitchen for coursework and other community-building activities, not only on campus, but also throughout the town of Grinnell. Besides her donations to local food pantries, Leahy is also looking forward to participating in Grinnell’s Community Meal, hosted by the Methodist Church.

Leahy says she has been able to develop new relationships by talking to people about her MAP. It's about paying attention to people and getting to know them, she explains, and listening to their ideas about what the Global Kitchen could contribute.

“Something Todd and I really agree on is that food is a form of community,” Leahy says, adding that people quickly begin to feel comfortable with each other when they cook and eat together.

Leahy, a studio art major and East Asian studies concentrator, served as an assistant for Armstrong’s First-Year Tutorial, Comrades in the Kitchen: Russian and Soviet Food and Culture in the Soviet Century. “I was just there cooking with them, so it was a ton of fun,” she says. Leahy loves studying languages — she speaks Spanish and Chinese — so she was fascinated by the glimpses into Russian language and culture she got through the tutorial.

‘My Version of Fun’

She also loves trying out recipes to create something new to contribute to local food pantries and other community venues. “I try to keep changing it up,” she explains. Leahy collaborated with student workers at the College Garden to make carrot cake muffins using locally harvested carrots. She also made double chocolate macarons, a personal favorite.

In fact, baking is her first love in the kitchen. She grew up baking with her mom, who enjoys chocolate chip cookies so much she bakes them almost every day. They make a great snack for Leahy’s younger brothers and sisters after school. “Baking is always something that's encouraged in my house, but cooking has never been my strong suit.”

Her MAP has given her the opportunity to venture beyond baking. “it’s been a huge learning process,” she admits. “I had to be taught how to cook or cut an onion or how to cook vegetables and basic stuff like that.”

“I'm definitely getting better at cooking and growing to appreciate it,” she adds.

Armstrong has given her plenty of leeway to make the MAP her own. “I have a ton of free rein in this,” Leahy says. She has researched how other colleges with similar facilities are using their kitchens, and she is seeking out articles to support a paper Armstrong is writing. But what she really loves in the hands-on work in the kitchen.

“Honestly, I feel really privileged to get to do this as my MAP,” Leahy says. “This is definitely my version of fun.”