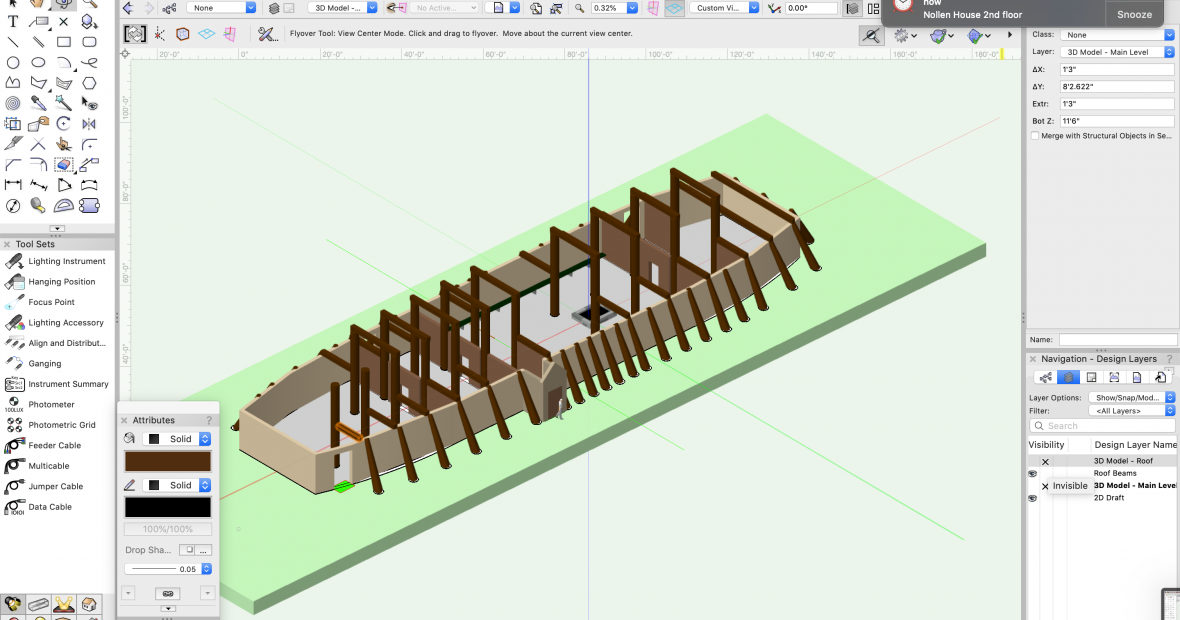 When Ethan Huelskamp ’20 saw the student job posting for a 3D artist on the Grinnell Beowulf project, he was immediately interested, even though he had no experience.

“I never thought I’d have the opportunity to gain this type of work experience in technologies that create hyper-realistic scenes, simulate physics, and so much more. Opportunities like this are attainable at Grinnell,” says the biology and anthropology double major.

Working with Expert Faculty and Staff

Six members of the class of 2014 translated into modern English the story of a warrior who defends his homeland through feasts and feuds that were part of Scandinavian cultural traditions. The Grinnell Beowulf, available on Digital Grinnell and from Amazon, includes introductions and more than 165 annotations to the poem.

Neville, who also directs the College’s Immersive Experiences Lab, saw the ongoing Beowulf project as a perfect combination of coding and culture. “Tim’s translation project and the lighting and design expertise of Justin Thomas, associate professor and chair of theatre and dance, literally creates a script for [virtual reality] technology,” Neville says.

Huelskamp’s 3D animation work to reconstruct a Viking mead hall (longhouse) and village merged with the MAP project of Joseph Robertson ’19 and Madison Smith ’20, who conducted background research on the social and political makeup of Viking mead halls.

“Any summer MAP is a great opportunity to refine research skills,” says Robertson, who is double-majoring in philosophy and theatre and dance. “I was looking for a project outside my comfort zone, and I was happy to cull through the data of Viking customs, architecture, and material culture.”

“Though I had been interested in early modern literature and history, it wasn't my specialty,” says Smith, a double major in English and theatre and dance. “As Tim explained all of the detailed dramaturgy research and set design that I’d be doing, the project suited the way that I like to think and analyze. Turns out, I love the Vikings!”

During 2018 fall break, Arner, Huelskamp, Smith, and Robertson traveled to Iceland to examine Viking settlement sites and artifacts. Funded by Digital Bridges, DLAC, and the College’s Innovation Fund, the trip included a visit to The Settlement Exhibition in Reykjavik, where the team learned why mead halls were constructed and how the civic and personal spaces shaped early social structures.

“Up until the trip, everything I had been modeling had been based on readings and images found online. After the trip, I was able to model based on items I had actually seen,” Huelskamp says. “Seeing The Settlement Museum assisted me with the layout, dimensions, and textures of the mead hall.”

For Smith, the Iceland trip brought authenticity to their work. “The trip allowed me to see in real life the archaeology reports that I’d been reading. We could walk on the actual bedrock of stones where Icelanders made their houses, see the necklaces that ladies wore, and see how massive the weapons were.”

“We learned we had some things wrong,” Robertson says. “Visiting the actual site of a mead hall with a genuine expert on Vikings guided our project to a much higher depiction. We learned more about the essential aspects of Viking culture: gift-giving, banquets, and storytelling that all upheld the Vikings’ internal political stability and ties with other Viking clans.”

“History informs the project,” Thomas adds. “The end product will be a literal performance for an audience of one, the performance of a feast.”

The students’ work to date, a visual experience and restoration that embeds period objects, has been accomplished on a VR station in the Forum at the center of campus. Expected to continue another year, the Grinnell Beowulf VR project will advance during spring semester with virtual reality programming by Zoe Cui ’20 and 3D models rendering by Anna Brew ’21.