A new Grinnell College National Poll shows that four in five likely voters in the 2022 general election believe the overall health of American democracy is a major factor in determining how they will vote in the upcoming election. The findings of the poll, conducted Sept. 20-25, 2022, by Selzer & Company, were released Wednesday, Sept. 28, 2022. 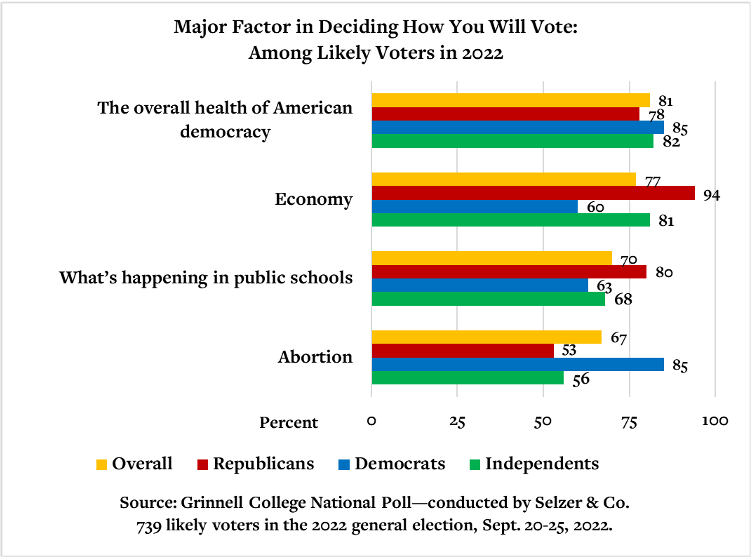 "Democrats are focused on abortion, Republicans on the economy and public schools, and both parties are fired up about the health of American democracy," said Peter Hanson, director of the Grinnell College National Poll. "Meanwhile, independents are much more likely to rank the economy above abortion rights as a major factor in their vote, and this creates opportunities for Republicans to win their support as we head into the final month of campaigning."

More than nine out of ten Democrats and Republicans plan to vote for their respective party’s candidate. Independents are split 32% to 28% in favor of Democratic candidates, and 22% say they will vote for someone else; 18% say they are not sure.

“If voters who refuse to align with either major political party are the definition of swing voters, for now, they are swinging toward Democratic candidates,” said J. Ann Selzer of Selzer & Company. “But not by much.”

Thirty-six percent of Americans approve of the job Joe Biden is doing as president, while 51% disapprove. Biden’s approval has risen among Democrats (76%, up from 70% in the March 2022 Grinnell College National Poll). Meanwhile, 91% of Republicans disapprove of Biden’s job performance (up slightly from 89% in March).

“It’s clear the president’s performance is not driving the women’s vote in the generic House race,” Selzer said. “Biden’s approval/disapproval rating among women who are likely to vote is even (46% approve, 46% disapprove), and 47% approve to 48% disapprove among suburban women voters. But among these same groups, Democratic candidates have a double-digit edge.” 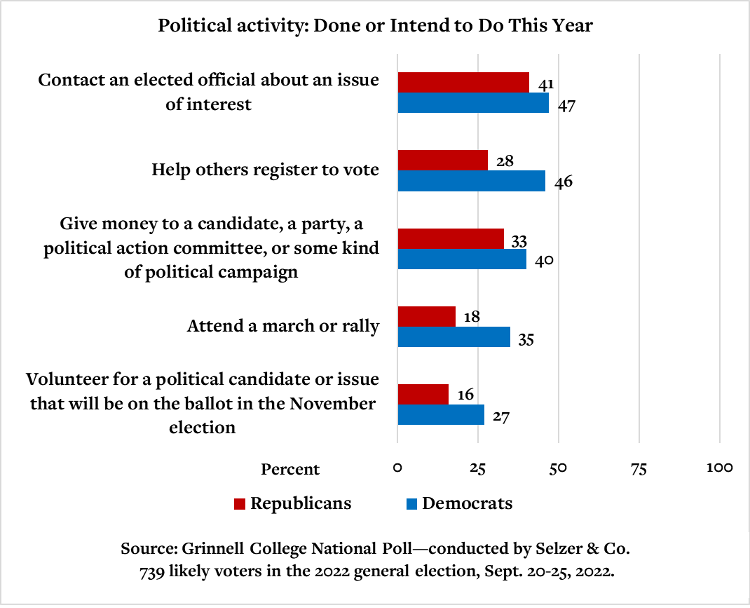 "Historically, midterm elections are often a rebuke of the party in the White House – think Clinton in ‘94, Obama in '10, and Trump in '18. But we're not seeing signs of a Republican wave in our polling," Hanson said. "Democrats report higher levels of political engagement than Republicans and are leading on the generic ballot. This election is going to be much more of a nail biter than expected."

Confidence in Voting Process on the Rise

Sixty-four percent of Americans have confidence that votes in the upcoming election will be counted as intended – a number that has risen over the past 18 months (53% in the March 2021 Grinnell College National Poll).

The rise has been greatest among Republicans – up 17 points since March 2021. 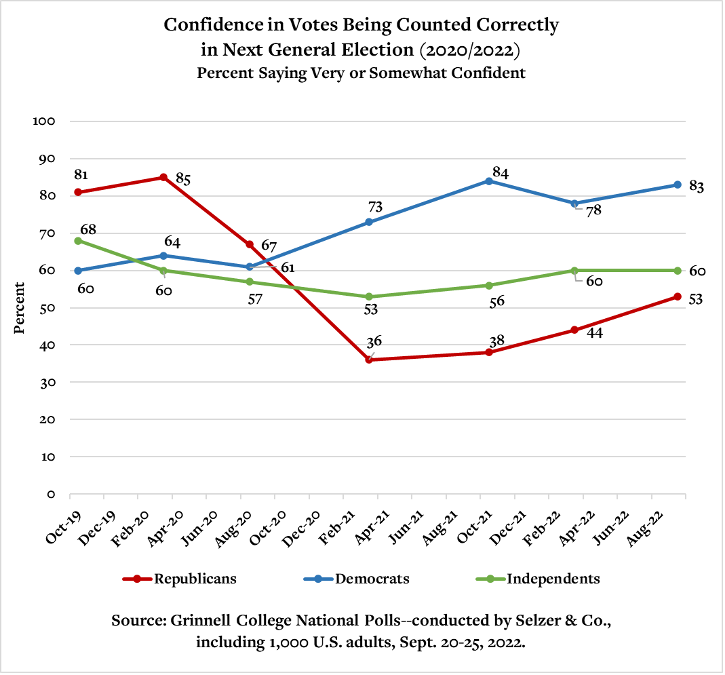 For more information on this or previous editions of the Grinnell College National Poll, visit www.grinnell.edu/poll.