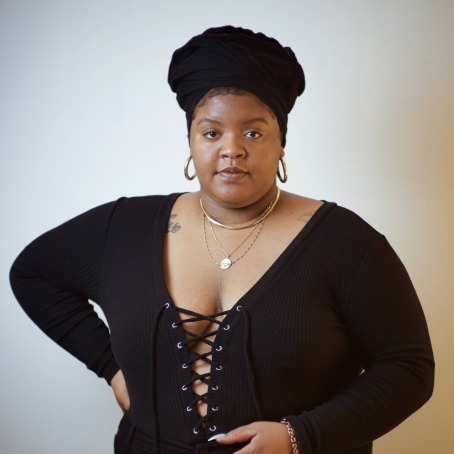 Jones received her award during the 2021 Grinnell Prize Award Ceremony.

Jones and TONE sustain their work by intentionally shifting away from a survival mindset and, instead, center their work in Black joy. One of the notable aspects of TONE’s model is the organization’s commitment to acquiring property for Black Memphians to create and showcase their art. Their exhibition site, TONE hq, is located in a formerly redlined Black community, Orange Mound, where residents have been systemically excluded from the dominant, white arts scene both as artists and as consumers of the arts. The site hosts programming and workshops for youth and adults and offers performance space for Black artists to hone and showcase their craft. Jones believes that providing consistent, reliable, and affordable space and opportunity is critical for Black artists to thrive. These artists go on to inspire their community with work that heals, emboldens, and archives Memphis.

TONE is devoted to the overall well-being of Black people. Even partnerships are navigated carefully so that the artists and Black-owned partners are benefitting in equal measure, if not more than, non-Black individuals and institutions that typically exploit the labor of Black artists and their communities. In addition, TONE strives to uplift the entire Orange Mound community in its partnership with Orange Mound Community Development Corporation. Together the two organizations are collaborating to form a community co-op for the neighborhood. Future plans include developing additional youth outreach and afterschool programs and creating additional studio and gallery space for Black artists. Jones has a vision to transform Memphis into the cultural beacon of the South.

Jones shares,“Our path to ownership, whether of land or business, remains systemically out of reach, obstructed by well-intentioned white folks who battle with the savior complex, hurdled by a lack of capital and resources that want to avoid ‘risky’ investments, and lengthened by the steady exhaustion that accompanies any force that is fighting to dismantle oppression while simultaneously being oppressed. But hope is not lost, for while the portrait being painted is bleak, the folks who have found means of survival, especially in the inspiring moments where folks have reached passed surviving to thriving, we are reminded that pressure makes diamonds — and we have a chance to bear witness to the Black brilliance in this city that simply refuses to die.”