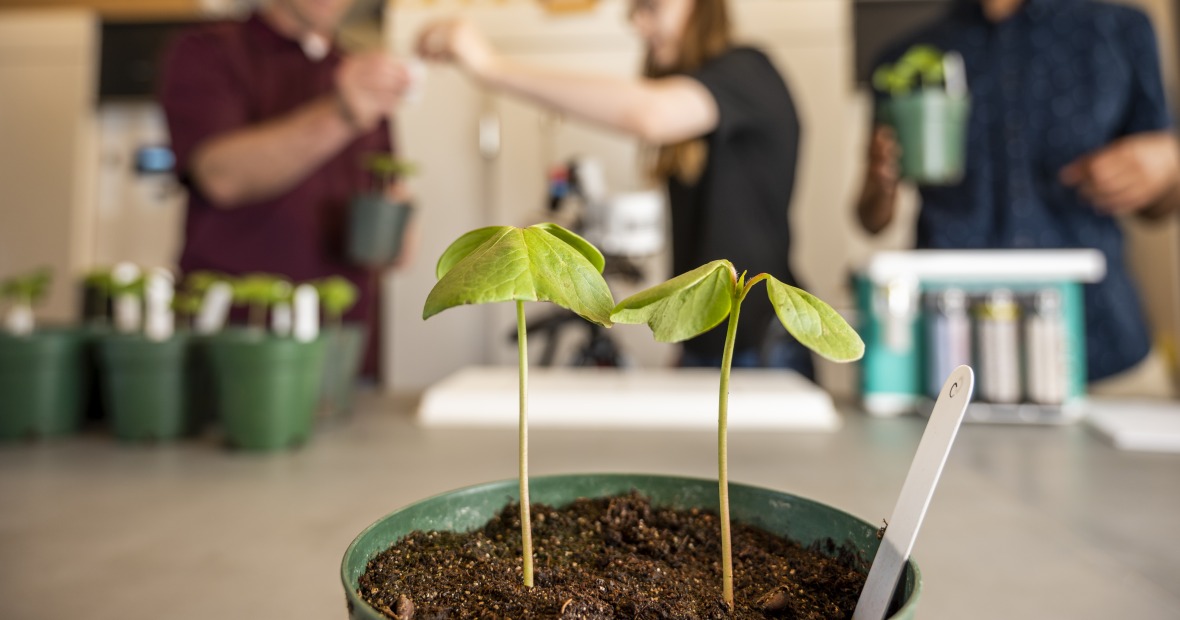 Mentored Advanced Projects (MAPs) give Grinnellians the opportunity to delve deeply into research or creative projects that integrate the knowledge and skills they’ve gained as an undergraduate. In the science division, work done by MAP students directly contributes to ongoing scholarly research. The experience often results in presentations, publications, and other opportunities, all while preparing students for research at the graduate-level.

While some students conduct MAPs for academic credit during the semester, many opt to apply for a summer MAP — living in Grinnell and conducting research full-time. (Any student who spends a summer here will tell you that there’s nothing quite like the community and tranquility of Grinnell in the summertime.)

Weeks after they concluded their summer science MAPs, we met up with five students to ask them about their research, the process of scientific inquiry, and what the MAP experience has taught them.

“I always enjoy learning new things,” says Malina Cantemir ’24, “and doing a MAP forces you to learn new things very quickly.”  Malina spent this summer in the laboratory of Joshua Sandquist, associate professor of biology, learning many new things about the embryonic cells of the African clawed frog. She overexpressed a protein, tricellulin, in the embryonic cells, and then observed the effect of that overexpression on how the cells prepared for division. It was a laborious process. A lot of time, effort, and luck went into identifying cells that met all the criteria for her dataset.

The thing that kept me going is that I could see myself improving.

Initially, Malina struggled with a sense that she wasn’t doing well enough or accomplishing enough. It took several weeks and many conversations with friends, labmates, and her advisor to overcome that worry. “The thing that kept me going is that I could see myself improving,” she says. Malina’s learned that, sometimes, research simply moves slowly and it’s not a reflection of her competence or potential. “Now, I’ve gotten to a point where I’m perfectly happy in the laboratory, working alone, sometimes even making mistakes,” she says. “I’ve found that I genuinely like existing in lab.

Jiayi Chen ’23 is an economics major, but that didn’t stop her from joining the research team of Fernanda Eliott, assistant professor of computer science. Why do a computer science MAP as an economics major? “I think that economics today involves a lot of data analysis," Jiayi explains, "and I see data visualization as storytelling. If you make data visual, people can truly access what is going on. Doing this MAP I got to improve my ability to do that.”

I see data visualization as storytelling...Doing this MAP, I got to improve my ability to do that.

This summer, Jiayi worked in a team of students on a project called, “Meaning of Meaning,” which blended computer science with neuroscience and psychology. They worked to identify clues of moral intuition, semantic meaning, and common sense in different images, in hopes of understanding how human visual reasoning can be mirrored in computational approaches and in artificial intelligence. Jiayi was tasked with developing an interactive web app that presents the group’s findings, work she’s continued as a MAP this fall. Over the summer, her research team also got to attend the 2022 Conference of the International Society for Research on Emotion at USC. There, Jiayi was amazed by the application of all sorts of research to real-world problems. “My experience at that conference confirmed for me that I really want to go to graduate school and do research,” she says. “It was so inspiring to see people research something they love and then share that work with others.”

Dolché spent this summer in the laboratory of Erick Leggans, associate professor of chemistry, synthesizing an antibiotic molecule called teixobactin. Teixobactin is produced naturally by a bacterium found deep in subsoil layers, Dolché explains, but it’s difficult to isolate the molecule in quantities large enough to harness its antibacterial properties. Instead, her MAP aimed to reconstruct the molecule, building it piece by piece — one organic reaction at a time.

Doing research was an experiment in and of itself.

Dolché is a fourth-year biological chemistry major who took most of her lab-intensive biology and chemistry courses online during the pandemic. The summer MAP was her first hands-on laboratory experience so doing research, Dolché says, was an experiment in and of itself. For the past few years, she’s had her sights set on becoming a physician’s assistant (PA), but she’s also been curious about whether she’d enjoy a career in clinical research. Conducting a summer MAP gave her the opportunity to explore the life of full-time research. For now, Dolché plans to stick with PA school and not a research career. “But now I can make that as an informed decision,” she says, “having done research for a while and had a really great experience.”

This summer, Ella conducted a MAP with Priscilla Jimenez Pazmino, assistant professor of computer science. In a team of students, she worked to develop a virtual dashboard that will simplify how researchers navigate databases to expand their research. “Especially when exploring a new research topic or field, it can be overwhelming to understand and access trends,” Ella says. The dashboard she worked on will address this problem, distilling search results down to a visual array of the leading papers or topics in a field.

Part of Ella’s project involved integrating files written in two different programming languages. "These two  languages communicate with each other differently," Ella explains, “so I had to be a sort of translator and figure out how they interact.” As a computer science major with a strong linguistics background, she found herself uniquely suited for this unexpected translatory challenge — and she loved it.

It was challenging but also very exciting that there wasn’t much existing research pertaining to that specific issue — we had to answer our own questions in order to conduct our project.

Everyone needs statistics. That’s the idea behind Dataspace, a web app being developed by Shonda Kuiper, professor of statistics, and her research students. Through games and interactive “data stories” drawing from real-life datasets, Dataspace guides users through principles of statistical analysis. This summer, Shrey joined the Kuiper laboratory to help with the development of the Dataspace website. He spent the first couple weeks of the summer analyzing data and building machine learning models based on a survey of people who had played the statistics games on the website. "The goal was essentially to determine whether using games to teach statistical concepts is a good idea or not, and the answer was, yes it is!" Shrey then moved on to design work that will help make the website as effective and engaging an instructional resource as possible.

You learn to say, ‘I haven't done this but I've done similar things.’

Shrey is a computer science major and a statistics concentrator, and prior to this summer he had almost no experience in website design — especially not in front-end design. (“Front-end” refers to anything that users see when they interact with a software or a website.) Doing front-end design, Shrey says, meant putting himself in the user’s shoes. “Before this MAP, I didn’t realize how much time and work goes into the slightest detail, into the tiniest thing that a user might interact with,” Shrey says. He’s learned that tackling a computer science project requires flexibility with your skills and understanding “No matter how prepared you feel you are or aren’t, you learn new skills on the job," he says. "You don’t say, ‘I can’t do this because I’ve never done it.’ Instead, you learn to say, ‘I haven’t done this but I’ve done similar things.’”